Attending your local festive club contest is a highlight for any match angler. In fact, they become something of an annual ritual. That’s especially true of the Tiverton club’s Christmas match, which has a big entry pool, lots of prizes and an unpredictable venue- in other words all the ingredients for something a bit special.

I’ve fished it for several years running now and it always brings a keen sense of anticipation. As often as not, though, it can be a bit like the New Year’s Eve of the match calendar… you get all excited and then it steadily fizzles out when you draw a mediocre peg. But could this be the year to beat my best finish of third?

This year, I was also crossing my fingers for Adam Aplin, my fishing buddy who had taken the plunge to attend his first ever match. 64 anglers were on the list for a typically excellent turnout and the omens looked good, with a dry, mild day in store. 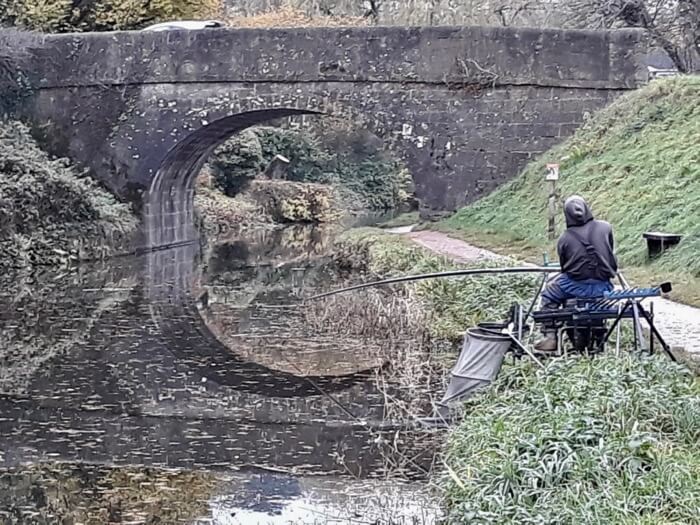 Adam drew peg 13, just a little further on from the fancied early pegs. Meanwhile I drew 34, just past Tidcombe Bridge. Harrummph. The bend swims can be excellent, but the straight beyond is always difficult- and the consensus was that anything near the kilo mark in my section would be a good result. My swim looked poor but there’s always hope, I guess. And I tend to believe virtually every swim on the canal has two things present somewhere: a jack pike and a dog turd. When you spend five hours trying to attract silver fish and possess size 14 feet, both are somewhat hard to avoid.

The start was of the match was dire. I tried a whip line at 4m, as well as a punched bread line down the middle and a chopped worm line on either bank. Alarmingly, the whip rig didn’t find a bite in the first hour, while my first bite down the track took a full 35 minutes.

With no second bite in sight, it was a case of no further messing and onto the worm lines. Nothing on these either. In spite of the total lack of response, though, I kept just a tiny pinch of bread going in close in and down the middle. After an hour I had a couple of small roach on the whip… then nothing. The worm lines were topped up, too, albeit with tiny helpings of chopped worm and pinkie. This was not going to plan at all- and poor old Simon Maunder (pictured here) had yet to get a bite! With the going so slow, I was glad of his company all the same. 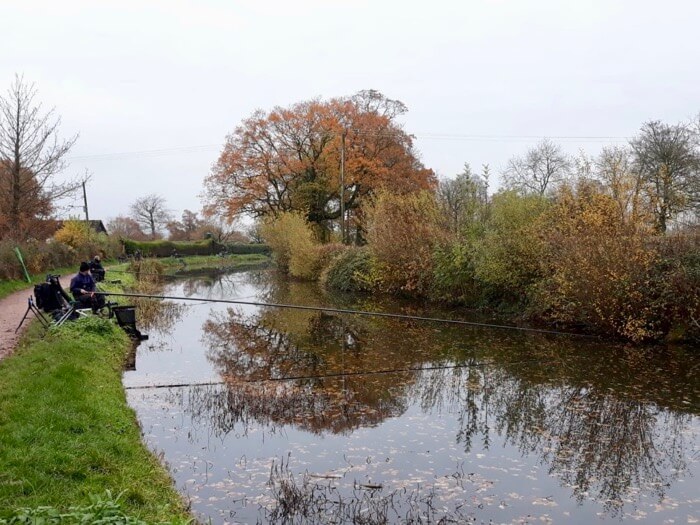 Back down the track I tried again, this time with a lighter rig and a size 20 hook. Immediately I hooked a skimmer of about 4oz… which came off just as I reached for the net. Piss poor luck, but would the swim now wake up? In a word, no- nothing on the deck, nothing off it. Nothing on the worm lines. It felt like it would be a long match- and nobody either side seemed to be getting much, other than a good skimmer netted three or four pegs along.

It became a real scratching game, as I started two new chop lines to cover every base and try and winkle something out. And on about two and a half hours the gods took pity as I landed a small perch and then a very welcome jack pike of about 10 oz took off on the far bank line! With the lacklustre first half this put me second in section.

Two more roach came down the central track next- but again, this was followed by nothing. The whip line showed signs of life though- with tiny fry topping as I kept putting in tiny nuggets of liquidised bread. It was a faff just getting through the leaves to present a bait, but the odd bite materialised. I had the odd very tiny roach, but also lots of minuscule bites that didn’t develop. I suspected sunbleak, or “motherless minnows” as the locals call them… fish that tend to be too small even on the 24 hook I’d scaled down to!

Word was coming back that the stretch nearest the town was the place to be. Some anglers had found skimmers; one even had a tench. Not much consolation when you’re struggling- but at least Adam hadn’t blanked and was off the mark with a roach and a perch. I was relieved for him; after all it’s not hard to blank on a tough day here and I’d hate for this to happen in his first ever match.

Back in my peg, I tried starting another bread line, but nothing happened. I also kept trying my worm lines and cursed as I missed a really juicy bite. Then something interesting happened- on the whip line, immediately after I fed some bread, a whole swathe of motherless minnows leapt out as something attacked them. The same thing then happened a few moments later.

With only some thirty minutes left, I went for broke with a whole lobworm on a heavier rig, flicking this around my whip line while keeping some feed going in. Just as I was about to give up, with a mere ten minutes left, the float tip went sailing away at speed- I lifted and the elastic pelted out at speed. It had to be a pike!

The fish caused me several anxious moments- not least of all becasue it wriggled out of my net head at the first attempt! Luckily it was hooked right in the scissors, though, and the teeth didn’t cut my line. A couple more thrashes and I scooped it out with huge relief. My weight had just doubled in the last ten minutes of the match! 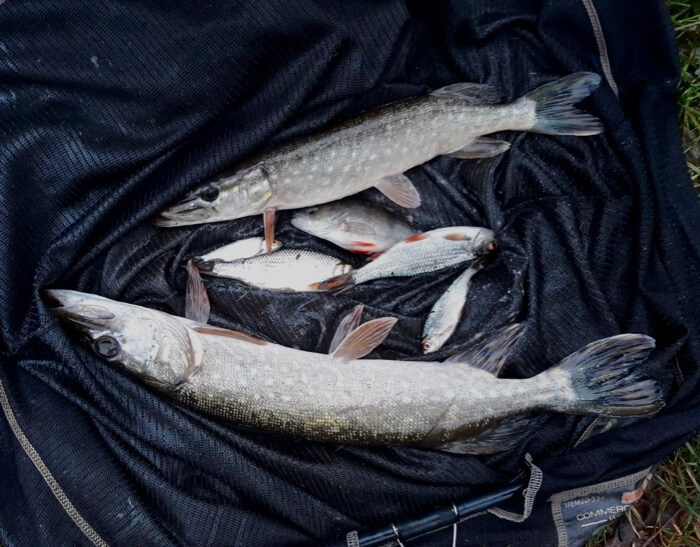 While I knew full well it wouldn’t get me close to the top few places, I fancied I might just be in with a shout of winning my very poor section of 16 anglers. And so it proved! 1.310 kg (about 3lbs in old money) was enough to take it- and a very satisfying £20 and a nice bundle of festive chocolate and some Sensas groundbait. Meanwhile the bigger prizes went to those in the early pegs around School Bay, with the odd tench featuring among bream and skimmers (full results here).

Actually, the prizes in this competition are truly excellent- and everyone who weighs in gets something for their efforts. Adam had been a bit unlucky, having lost a jack of his own and a reasonable skimmer, but took home a bottle of wine all the same- a great way to finish your first ever day of competetive angling.

In fact, young Adam is threatening to join us for some more matches in the 2020- there is always a lively league and it has to be one of the friendliest clubs for match fishing in Devon (see www.tivertonanglingclub.com for full listings, as well as an archive of the club’s match results).