This time of year can feel a bit ominous at the best of times. Just as you pine for one last weekend of t-shirt weather that never comes, you inevitably finish summer with so many dreams unrealised.

In my own little world, though, things have been very finely balanced. My switch of jobs to the Angling Times couldn’t have worked out much better. I’ve been covering stories really close to my heart, whether that’s meant a look at the problems of fishmeal and possible alternatives, or the massive growth in angling as therapy. Meanwhile, though, it’s been as tough as ever to balance the demands of work, family and the bank balance with angling.

I also blew an excellent chance at silverware in the local match fishing scene this year. Ok, so having the Tiverton AC league title isn’t like winning the FA Cup. But having led the 30 or so regulars almost all season, it chafes to lose it at the very last match! A bit like England at the Euros, it’s the hope that kills you. You can read more about my match fishing joys and woes over the season in the usual “Last Cast” column in the Angling Times, anyway.

Very much a case of back to the drawing board with the matches, then, but looking at things soberly, it’s been a summer of growth. And at least some other things have very much gone in my favour this month. Not least of all an unusual mission on the river.

By pure accident, I stumbled on a very effective late summer method of catching some cracking chub on Somerset’s River Tone. I’ve been roaming its banks several times lately, casting lures and flies, with some decent success. At the end of one especially early trip though, I found a really inaccessible spot with some late summer blackberries nearby. Not really wanting to rush home, I found myself eating these off the bushes while also throwing some in.

Imagine my surprise when the chub sitting below didn’t just take a look, but scoffed them down! At first, the fish were typical Tone chub from a pound or so to double that. A few berries later, though, and a fish of easily four or five pounds started coming forward. A fruitful thought for next time?

Well, I put that exact idea to the test with young filmmaker Tristan Cooper, who’d got in touch with me recently about doing some stuff for the camera. I’m not going to spoil it – but suffice to say you can watch the results here:

Here’s a still image of the best fish. For the Tone, this is probably my best ever. I opted not to mess about with it by going back for sling and scales, but I’d have guessed it at four or five pounds quite easily, given its carp-like frame and belly! And all for some free bloody blackberries, that were simply hair rigged on a size 12 and cast with a very basic float and no shot at all. 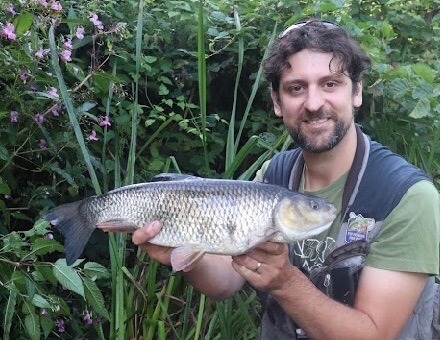 Finally, we also have an excellent little crop of books and quarterlies coming through. One reason to be cheerful on cold evenings to come, I guess, and we could all use some escapism. 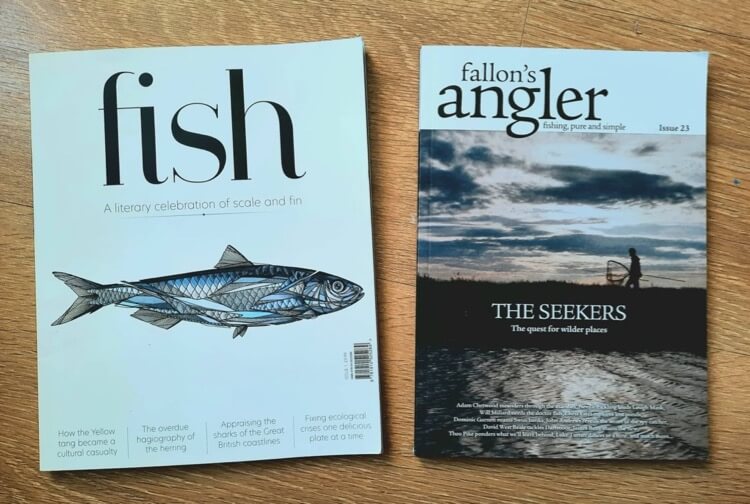 First up, there’s a new quarterly book-a-zine in town. The title Fish says it all. We have a quarterly coffee-table publication not devoted to fishing, admittedly, but to fish in all their forms and incredible variety. Unashamedly arty and literary, I knew from the first flick through that it would appeal.

Just to give a quick flavour, Fish takes you everywhere from the surprising world of British sharks, to invasive fish species worldwide. The photography is certainly beautiful and the words really pop too. Writers have clearly been selected on merit- and there’s some real flair here in both text and visuals. Just read Ivan Mikolji’s account of piranha fishing in Mexico, or gasp at the fish art of Teuthis and you won’t regret a penny of the £9.99 you forked out on issue one. Talking of forks, there’s even a funky fish recipe or two, ideal for getting a meal out of those invasive species.

I’ve since seen nothing online whatsoever about Fish Quarterly– but rest assured, I didn’t dream it and you can still find a few copies in WH Smiths and bigger newsagents, with issue 2 due soonish for the winter.

Meanwhile, another recent destination has been not so much a new title as a well-established favourite, Fallon’s Angler. At 23 issues old now, it’s no mean feat to keep the format and the contributors’ list so fresh, but Garrett Fallon continues to do a great job. He’d be too modest to say so, but I often feel his own work is among the best of it: elegantly written, funny and authentic, without ever getting too esoteric. 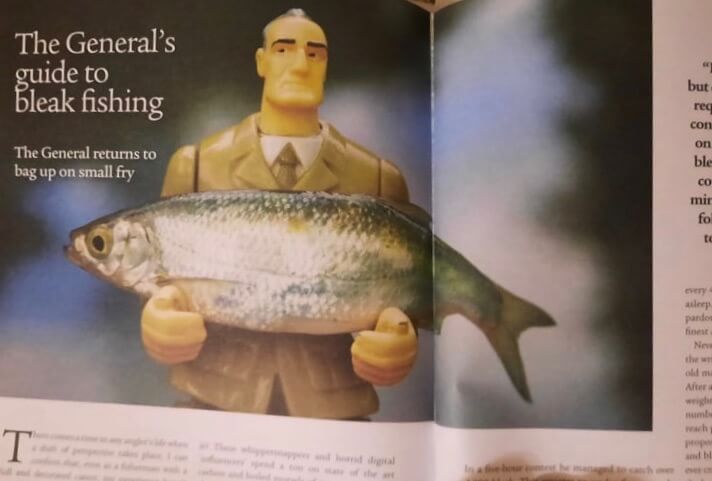 The list of contributors remains as varied and surprising as ever, you’d have to say, looking at this issue. Where else do you get Neville Fickling, Will Millard and The General all in one place? That would be one strange pub!

Otherwise, the issue is much a catch as ever, with the loose theme of wild places and those who seek them out. David West Beale ventures onto Dartmoor, Chris Yates writes about the lost ponds of childhood, while Theo Pike ponders what might happen the day humans no longer mess about with rivers (or are too extinct to do any more harm). Meanwhile, it’s also a return to longer prose for yours truly, with a fondly remembered trip to Switzerland and a strange tench encounter.

No spoilers otherwise from me- just treat yourself to a copy at fallonsangler.net, because if you are an angler with any kind of soul, you’ll find something to cheer your heart and stir your grey matter!

Fishing from the Rock of the Bay

Talking of things to cheer your heart- and indeed Fallon’s Angler contributors- another big highlight has been tucking into James “Leakyboots” Batty’s second book from Merlin Unwin. If you enjoyed his last work, Song of the Solitary Bass Fisher, you’ll half know what to expect already. 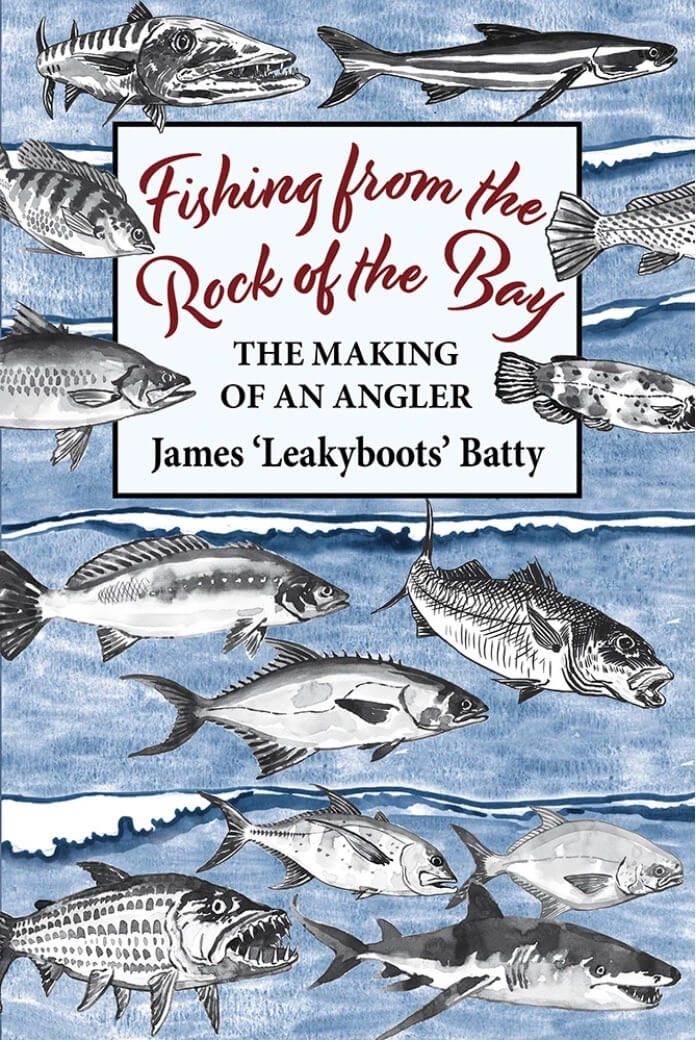 In fact, James Batty is like six of the funniest and most frank anglers you’ve ever met, stuffed into just one pair of wading boots. Presumably leaky ones. With tales of hunting wild pigs in Africa or catching strange and dangerous fish, you might also compare him with that old raconteur off The Fast Show, although I can assure you that Batty was not “terribly, terribly drunk at the time”.

What can I say? From the boozers of Dublin, to the seas of The Gambia, there is an absolute ton of fun to be had. There’s scarcely a page that won’t make you chuckle, nod in agreement or simply think to yourself “that’s off the chart”. What a joy to read an angler who not only knows their own mind, but is old and weather-beaten enough not to care what we make them, and  knows how to deliver a great one-liner.

The chapters themselves are also succinctly organised without detracting from the anarchic sense of fun. Seldom above three or four pages, each section starts with a line from music or literature before a departure into something pithy and amusing. This keeps everything punchy, and whether the next section is on making your own lures or angling and drinking in Dublin, it’s a supremely entertaining and “dippable” read.

All in all, a great find from Merlin Unwin books and another unique voice to join the fray. Indeed, if John Moorwood (who I discussed with The Magic of Fishing recently) is angling’s most moving current writer, James Batty is probably the funniest. All of which gives me heart that angling books and literature are not disappearing anywhere just yet, at least not while we have new gems being unearthed.

Until next time, then, treat yourself to a great book and hang in there as the cold season comes in. Life goes on, even if the scientists keep giving hurricanes camp names while imbeciles start panic buying diesel. And there’s always a bite to be had somewhere.