Home » Blog » Fly fishing in Devon and Somerset, from low cost to no cost!

Did you ever get the feeling that much of the best fishing was hidden behind “private fishing” signs in expensive, members only waters? It can be a particular issue in fly fishing, which is why I’m always keen to share low cost and free fishing waters in the South West, both in my guiding and blogging.

After all, you cannot guard your local fishing jealously, and yet in the next breath complain that angling numbers are declining or the sport is in poor health. Every time I hear a member of an expensive private club or syndicate moan that “we’re just not getting enough new anglers” part of me wants to slap them.

But the better news is that a lot of the cheaper fishing down here in the South West is of a very high standard. It can be challenging, but it’s also endlessly varied, especially if you throw in coarse and sea fish. The tricky part is often finding it, due to either secrecy or angling tending to be a bit crap at promoting itself and making information easy to find (sorry, but it’s true). 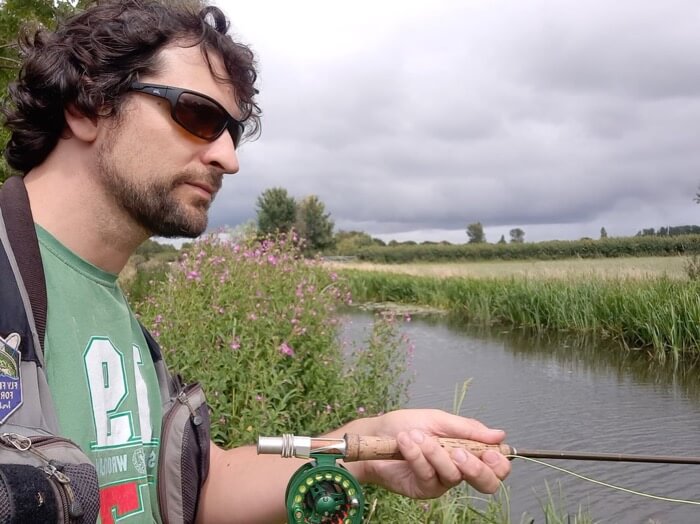 Talking of cheap, untapped fishing, I’ve been back on the canals this month. Having just moved house, I can hardly express the relief felt all round. Lockdown had been very testing in a flat with no garden… so to have outdoor space and a garage has felt like a rare luxury. With so many boxes to unpack and my young daughter to look after, however, most of my fishing sessions have had to be well-organised and as simple as possible.

One thing I’d missed a lot had been fly fishing for coarse fish on the local canals. I’d originally intended to get back on the rudd, but after seeing some absolutely stupendous roach, it was these that took up a fascinating couple of hours on the Taunton to Bridgwater Canal (which you can get tickets really easily for online at www.tauntonanglingassociation.co.uk).

You could actually see these fish tearing into the weed and rooting about on this visit. Having not spawned too long ago, they seem seriously active and hungry, and are packing on weight quickly, but turned out to be no push over. Part of the challenge was that many of my favourite flies were still packed away somewhere! Hence I had to make do with my river box and some bits and bobs raided from my packing. 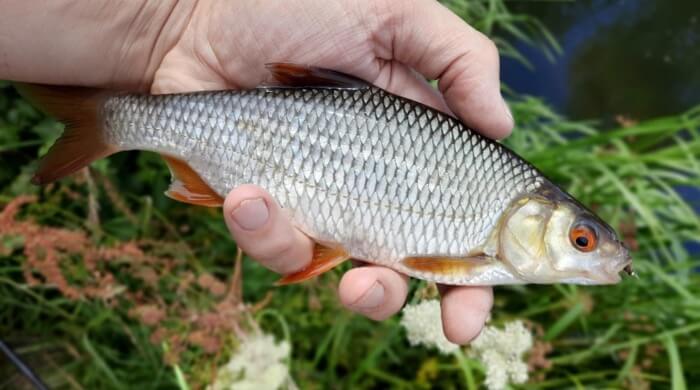 At first, I was frustrated trying slow sinking spiders. As is quite common, roach tend to like a fly fished a little deeper than rudd. But a lot of my beaded river flies were just too fast sinking and you could see the fish didn’t quite trust them. The breakthrough, then was with a tiny size 18 Prince Nymph.

These are usually tied much bigger and I’ve seldom used them for coarse fish, but on this occasion it was very much the fly they wanted. It was fascinating watching these weed-tearing roach. In open water, they would often pass up on the fly, but the little groups of fish rummaging on the bottom were very catchable. Any presentation where the fly hovered just off the weed they were pulling at, then as often as not a fish would immediately inhale it, perhaps mistaking it for a shrimp or nymph that had just been dislodged.

I had seven or eight net-worthy roach in the end, besides a lot more hits, misses and smaller stuff. The best of all was a real bruiser of a roach, too, of around the pound mark. The take was surprisingly aggressive and the fish really pummelled impressively on my 10ft 4wt.

Two other things also stood out as I made my way along the Taunton to Bridgwater Canal towards Maunsel Lock. One was the large amount of boat traffic! Canoes and rowboats at least don’t kill the water clarity- but a new hire centre seemed to be doing rapid trade with the return of day trippers and tourists. I don’t begrudge anyone enjoying the canal- but one or two could have done with some steering practice, as they were crashing all over the shop and sending the roach packing!

Also very noticeable were large numbers of young chub. Whether the local club have stocked these, or the existing fish have bred like wildfire, these greedy fish are sure to do well here. We still tend to think of these as river fish, but they adapt very well to life on the canal- and my best fly caught chub remains a 3lbs 12oz fish from the canal, even though I’ve had far greater numbers from the River Tone.

Plenty of reasons to be optimistic then, even from my brief afternoon visit. There are so many miles of this canal to walk- and although I couldn’t get one to take, I also spotted some lovely tench and bream.

The cheapest trout and grayling fishing in Devon?

Still on the short session fly fishing theme, I’ve also been exploring some accessible local river spots. While so much of my local River Exe is annoyingly private, there are indeed some better value and more accessible stretches still on the cards. In fact, the urban Exe in Tiverton has to be some of the cheapest fly fishing in Devon! 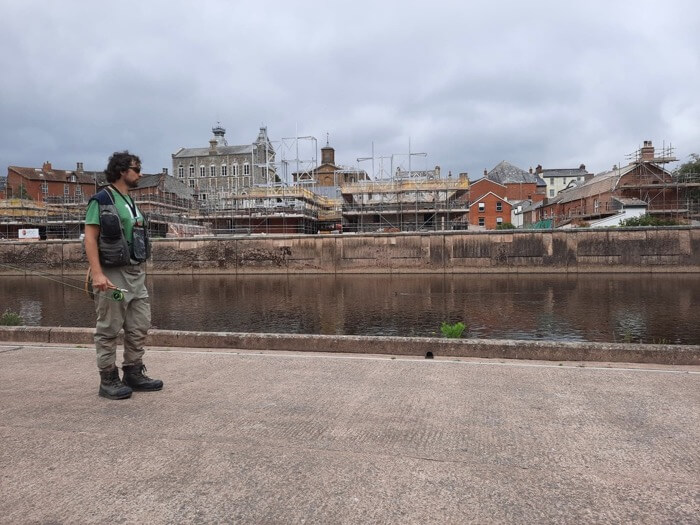 Granted, so it’s not very extensive. Nor is it glamarous. But the Tiverton DAA ticket (the same that lets you fish the canal) allows you to fish the so called “Exe Walk” in between the two bridges in the town. (Or at least that was the best information I could find after scouring every source going!). And it has a decent head of trout and grayling.

I hadn’t fished it in a while. Truth be told, I had forgotten just how weird Tiverton can be! As I found a parking space, the police were dealing with a raging domestic row. Then, as I made my way to the river, things were no less colourful, with a bunch of kids all jumping in the river and a sleeping drunk clutching a Sports Direct bag containing his clothes and empties. Oh Tiverton. I’ve always had a soft spot for you, but you’re a bit rough around the edges.

In all honesty, I’m used to the cheap seats in my fishing. I’m not about to splash out hundreds of pounds on an expensive Exe syndicate. Much as it might lead to more peace, I still catch plenty of fish in more public and cheaper fisheries; and it also means that when I guide others and write about local fishing, I’m not leading them to a false paradise that they can’t even fish outside of the occasional expensive “treat”. Again, this is something we need to address further both in the South West and nationally, if we want fly fishing to get to a healthier place. 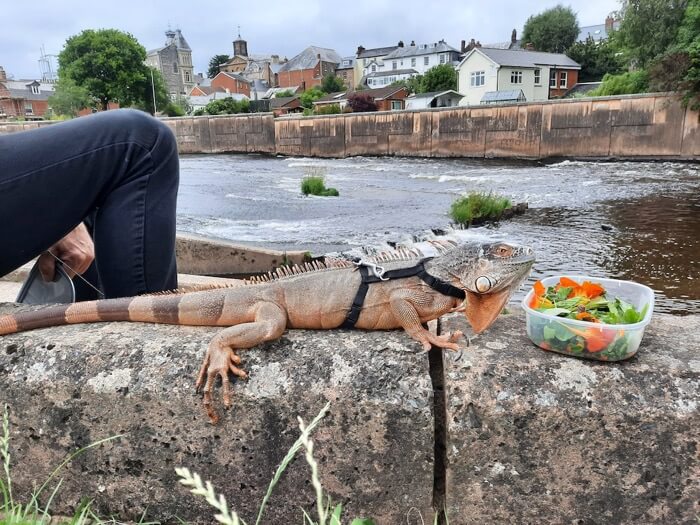 As for Tiverton, it got weirder by the minute as I tackled up. While I made my way to some tempting boulder-strewn runs in the town, I did a double take at the sighting of a big lizard chilling out on a wall. No, I haven’t been taking acid; a local guy was out with his pet iguana! I kid you not. As I began to wade into the Exe with lorries crossing the road bridge behind, I got a kind of warm glow with the reassuring thought that British eccentricity must be alive and well. At least in Tiverton.

The river was a bit muddy, unfortunately, after quite a wet June and early July. Or at least this was my excuse, as I had only one small trout in a couple of hours. With supreme optimism, I’d started on the dry fly and then a single nymph under an indicator. I suspect I’d have fared better and very possibly managed a grayling had I gone straight for a long rod and French Leader type set up- but you live and learn.

Actually, there were some small olives peeling off at times, but I didn’t see any rises. And with no improvement switching flies, I decided to have a final hour on the nearby River Lowman at Amory Park (which has pretty crusty urban surroundings, but is free fishing with an EA licence- the best write up on this place and several other urban fisheries remains Theo Pike’s book Trout in Dirty Places), before heading home.

This turned out to be a great decision. The fish weren’t big or especially clever, but this bit of river was as cute and productive as I’d remembered. I winkled out four or five little beauties in quick succession, with a tiny bead head nymph and Elk Hair Caddis combo. The more boisterous water was best of all, especially a slightly bigger pool with the obligatory shopping trolley poking up. It didn’t take long for me to nip off the wet fly altogether and get stuck into some of the miniature pocket waters. 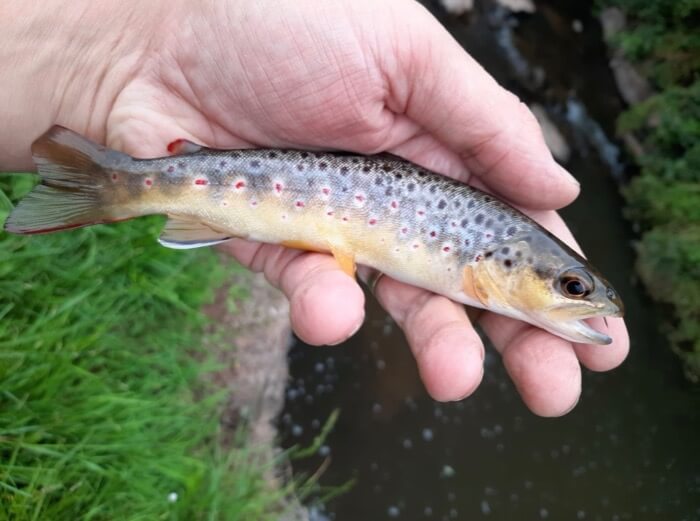 Little finesse was needed, another couple of fish lashing out at the caddis, while I resolved to tear myself away and return home. Much as I would love to have fished on, with further delay dinner would be getting cold and the little one would need putting to bed.  With the typical length of session I have right now, it’s probably just as well I didn’t bite the bullet this season and spend a fortune on an exclusive fishing syndicate. Never mind; in some ways it’s good not to be too spoiled, so you can pack up still hungry for next time.

Which just leaves me to sign off and wish you the tightest of lines this month. Don’t forget to keep an eye on my other blogging for the Angling Trust (including an enjoyable recent interview with angling licence artist David Miller!) and Turrall Flies, not to mention my weekly Angling Times column.