If you want to see how much someone misses their fishing, there’s an easy way to find out. First, stop them from any fishing for six weeks. While this is going on, insist they leave their home only once a day for a walk, usually around the same crappy park. Next, let them attempt to work from home, with partner and offspring in situ, 24-7. Shake. Stir. Repeat. Perhaps throw in some YouTube videos, books and magazines, just to really intensify withdrawal symptoms, to the point where even an accidental sighting of a garden pond consumes them with forbidden longing. You get the picture.

Yes, it was very necessary. No I am not about to gather with three David Icke followers to stage a weird protest. But like so many of you, I missed my fishing deeply.

I also know full well the fishing world has had to do some soul searching about how exactly return to the water. For a change, though, 90% of angling feels refreshingly united. I’ve been in the thick of the debate with the Angling Trust, who, let’s be fair, have done a brilliant job under Jamie Cook in making a sensitive, reasoned case for a safe, socially distanced return to fishing (lots of useful info here, on their dedicated Covid-19 hub). Most tellingly of all, it got through to national press and government- and quite clearly worked!

This is not the moment for me to delve into the ins and outs of that particular tub of maggots, however. Nor do I want to be too jubilant while a pound or two of stupidity could quickly confiscate our ounce of freedom. But suffice to say a lot of sighs of relief were breathed when that cautious green light came on.

How many bad moods lifted? How many anglers found that precious bit of happy escapism they’d so sorely missed? Dare I say it: how many domestic rows and soured relationships were avoided? Again, if you want to see how important something is, try taking it away for a while! Except the NHS, obviously.

The ultimate torture during lockdown had been strolling the Exeter Canal just a couple of miles from home. With no boats on the water, I’d seen fish like never before (funny that, because half the time all you hear is how cormorants and immigrants have eaten the lot). Stacks of roach, rudd and perch were there. Even more tantalising, some huge carp!  Could I find them again once restrictions were eased? I’m not going to spoil that one just yet (and ruin my next Angling Times column!), but I had an enjoyable return. 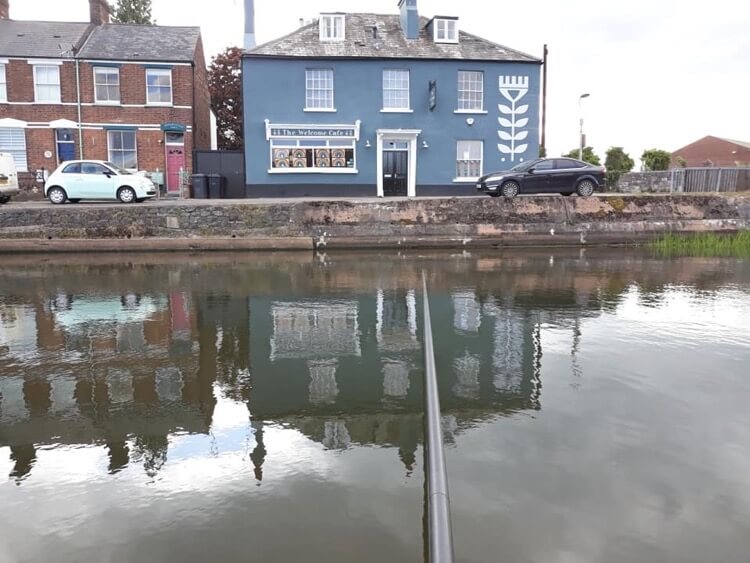 Enjoyable, yes, but also weird it must be said. Generally, I like solitude. Actually, I crave it. It’s the reason I’m a writer and not a salesman, a teacher or a politician. But I’d had so little time alone for weeks on end, it felt like a genuine novelty just to sod off for a few hours on my own.

At the same time as dreaming big, though, the layoff had also just turned me into a silly, excited kid who just wanted to catch any fish going. And so, after my afternoon on the canal I was desperate to get to the coast with the LRF tackle.

Looking back, it seems bonkers that in April last year I was putting the finishing touches to Hooked on Lure Fishing with Andy Mytton; while 12 months on I hadn’t made a cast in weeks and was more worried about dying than ticking the final species off our photography list.

With the needs of family to juggle and only an afternoon at my disposal, I decided on Brixham as an ideal place to head for. It’s always reliable for bites with small wrasse and other species. It also has easy parking and a neat little beach, and without the usual Armageddon level Torbay area traffic, we were there in no time at all. 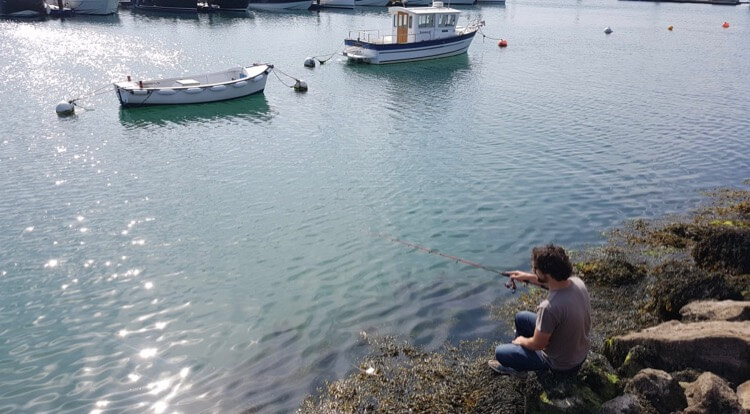 In my head, the plan seemed foolproof; in reality, it was a test of making the most of a short session while keeping wife and baby happy too. In spite of being a glass half empty sort of bloke, I am a ridiculous dreamer when it comes to fishing, so I’d taken not only the lure gear but also a fly rod and some experimental flies for wrasse.

By the time baby was settled and we’d walked part way up the Breakwater, however, time was already pressing and high tide imminent, so I got straight to it with LRF gear and a split shot rig, Isome and a size 18 hook. Right away I could see the fish home in, but things weren’t quite right. Initially, they seemed suspicious of pink Isome. They were then far more willing to attack a reddish-brown target (don’t ask me why, because sometimes the reverse is true!), and I got off the mark with a lovely little corkwing wrasse. These fish are such a joy to me, brilliantly coloured and such excellent scrappers on light gear. I’ve heard the various wrasse described like “sea carp” but they are more like the glam rock stars of the coastline. 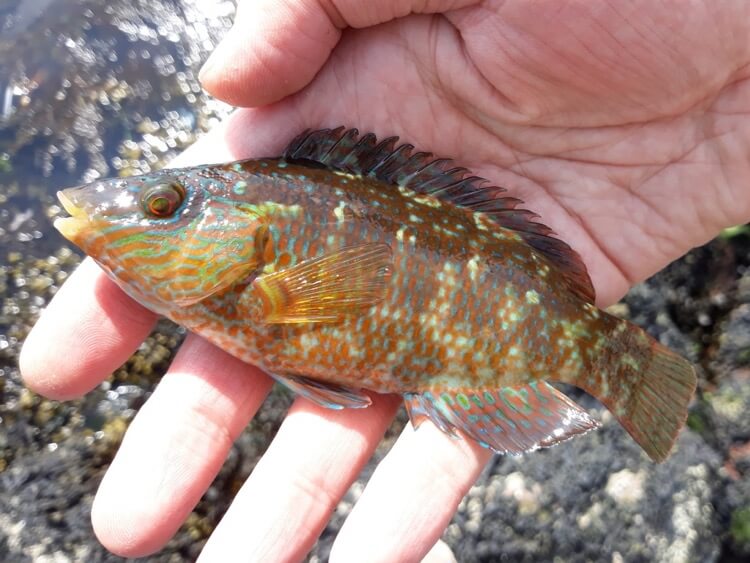 Duck broken then, but my tackle still didn’t feel quite right. Part of the issue is that even with my long arms and an extra step right to the edge of the water, it was tricky to hold the rig in the sweet spot, just down to where the bottom fell away from 2-3ft to double that.

The dropshot rig was the answer, allowing me better control and keeping an Isome or small rubber suspended just above the weed. Much better! The bites were fantastic, too. Instead of that limp Jehovah’s Witness knock on the rod tip, the next was more like the police smashing the door down on a drugs raid. Whump!

It always tickles me how even modest sea fish bite so emphatically. When you consider how delicately a bream or tench many times this size will pluck, wrasse can be fairly homicidal. In fact, you wonder how it took so many years to find out how willingly they’d bash lures. I had two more wrasse in quick succession in the time it had taken the wife to take a quick stroll up the breakwater and back with the nipper. 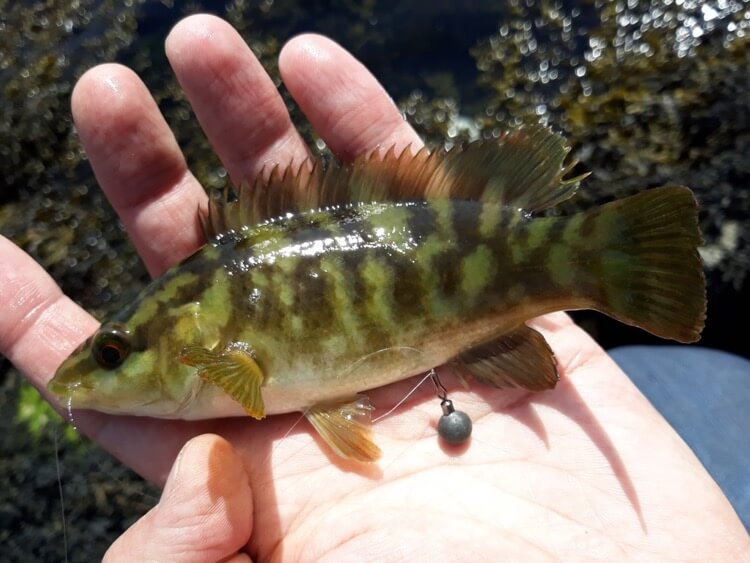 Talking of the little one, my daughter is so lovable and great fun, if exhausting. She is so naturally cheerful, energetic and extrovert, I sometimes wonder how we are even related; but seeing her first impressions of places, people and animals at just ten months is priceless. As is the magical effect a baby has on just about everyone.  It gives you restored faith in the world. Definitely so when even the most tattooed and grizzly local sea anglers, who look like they would chop your mother into strips and leger her, will still coo and grin at a little baby. 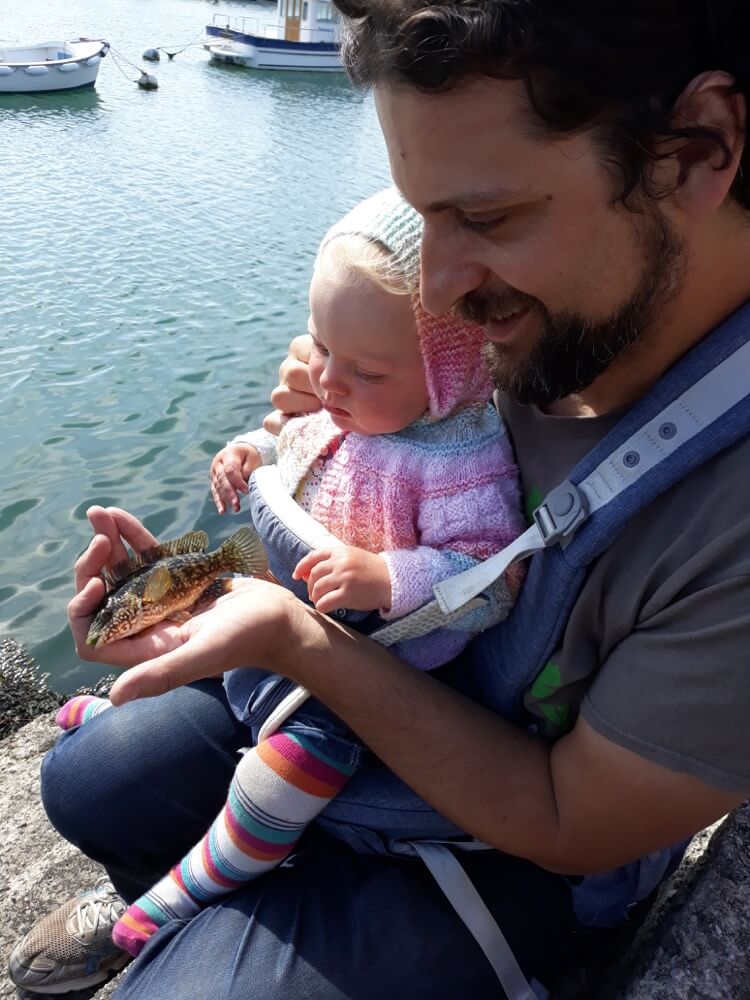 Rocky ledges are no place to carry a nipper though, so there were only one or two places I could take her closer to the water. I tend to think these accessible spots are the worst on any busy venue, but the bites quite quickly arrived. I got a good thump and both baby and dad’s eyes were glued to the water as a fish wriggled its way to the surface. She looked decidedly unimpressed- and then a bit scared. Clearly, the process of brainwashing will take some work with this one.

A quick dabble at fly fishing for wrasse

In so much of fishing, we’re told that the most priceless aspect is some “secret” bait, tactic or whatever. As a slightly more cynical 41 year old I can tell you that the truly indispensible quality is time. It runs out so fast. Even more so when you have grown up responsibilities.

But I digress. I had just the tail end of a session in the end to have a quick swing of the fly rod. Would it be enough? I’d been using some downtime in the lockdown to create some new flies- and besides stocking up the trout box I’d made some small sea flies for wrasse.

I should come clean with you here- I have tried to catch these fish and failed before! This doesn’t daunt me though. I was deranged enough to persist with tench and barbel on the fly, so I like a challenge. Before, I’d tried crab patterns and streamers- and caught nothing other than accidental pollack on the latter.

This time, I came much closer! The smaller flies with incorporated rubbery bits (that’s about as technical as I’ll get with you for the time being) quickly got some attention. Damn it, I was close! I could see small wrasse follow and even make a nip.

Perhaps with bigger wrasse I might have scored. But these were curiously absent (and other anglers on the breakwater reported the same). But with these bread and butter smaller specimens my flies were still rather big at around a size 10  Back to the drawing board for now then, but suffice to say I was both encouraged and a bit disappointed. Even a small wrasse would have pummelled my five weight well, I’m sure.

And now for something completely different…

While it’s brilliant to be back fishing, we can only hope the next few weeks pass smoothly and anglers everywhere manage to fish safely and set the right example.  Most weirdly of all, though, the whole crisis so far has brought out some unexpected positives. As I’ve recently written, it’s ironic yet uplifting how the sport’s biggest challenge in years has led –finally!- to some long awaited togetherness and unity of purpose.

It has also reminded me that life is about more than just fishing. One aspect of my life not known to many in the angling world is my great love of music, and in particular playing the piano. It’s something I’ve done most of my life, but the lockdown has really encouraged me to finally be brave and share my music. If you’re curious, I’ve added several videos to YouTube. I play a bit of everything, from classical to pop, but jazz and blues is perhaps what I enjoy most. Do have a listen and see what you think: