I won’t lie to you, late winter has felt endless this year. There is indeed light at the end of the tunnel (and we’re assured it isn’t a train coming to smash us to bits), but life still feels like it’s in slow motion. For some reason, the whole situation reminds me of one of those mornings when you wake up much too early for a fishing trip. You know the dawn is coming, but the minutes creep by incredibly slowly as you lie there unable to regain peace. 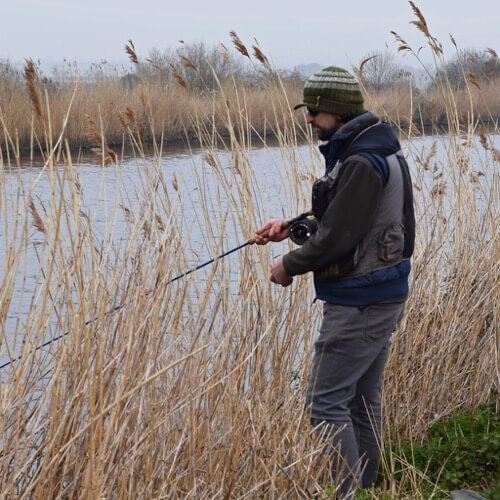 On the pike angling front, it has been an especially slow burn. The Exeter Canal would have a pretty limited highlights reel this winter! Not that this is that unusual, even on once more generous venues- and your reactions to my Angling Times piece on pike fishing being harder than ever were both welcome and fascinating.

While most of you agreed to some degree that pike are becoming shyer than ever due to high angling pressure, there is still an underlying attitude that there are no pike left, thanks to otters/ Eastern Europeans/ Meghan Markle (delete as applicable). I don’t buy this at all- partly because I still see lots of fish on clear venues, even when they won’t bite. It is angling pressure pure and simple, because we are throwing more lures and baits at these fish than at any time in history.

On my part, the season has been about sheer perseverance. Might I have a monster by now, sitting on two dead bait rods on Exeter & District AA waters on the canal or Urban Exe? Very possibly, but it bores me to tears. Thankfully, as conditions turn milder in late February and March, the going gets just a little bit better on lure or fly tackle. Even so, it has taken some long walks and awkward swims.

Just when I thought it was never going to happen, a larger shape or two finally loomed into view, including two lovely mid to upper doubles, including one which literally took the fly at the very last second of the retrieve! Its slightly bigger sister (below) took me by surprise even more. For the initial few seconds, she felt like I’d hooked a wet sack, before suddenly remembering she was indeed a pike, and quite an impressive and short tempered one at that! 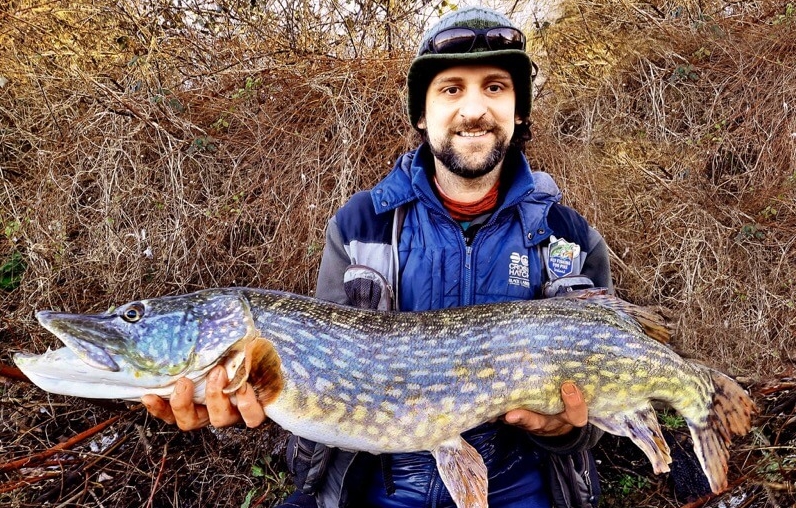 At 17lbs, I was still absolutely stoked. My thanks are also due to Chris Lambert, fortuitously passing by to take a picture, and John Deprieelle for editing the background. Sorry, but after dozens of miles of legwork I’m not about to plonk you right on the fish- you have feet and a brain, after all.

You can read more pike fishing thoughts in my “Last Cast” column shortly, but for the fly fisher, a few things really stand out. One is that you really don’t need to rip your fly in. I often think the bigger girls need a little more time to grab- and this is never truer than on deep waters. I’m also finding that in winter conditions a fast intermediate line is far more effective than the floater, especially given that my beloved/despised local canal is such a deep mother. I’ve also recently written a piece for the Turrall Flies blog with some observations and tips.

Meanwhile, some of my best results this season have come on very simple flies! Here’s a two-tone pike fly that can be tied in just five minutes with only four materials:

The only further conundrum is how long to keep fishing for pike. These days, many anglers will hit the water right through the year where rules allow. This is your shout, but in my humble opinion, we should all be thinking of the fish and not just our own preferences. Which is why my pike fishing will be occasional at best until October- and non existent whenever we reach high temperatures.

Another recent mission has been to catch old favourites on simple float tackle, from carp lakes in particular. Ok, so the venues are not as pretty as a classic river, but the sport can be excellent. Another aspect I like is that it isn’t smash-your-head-against-a-wall-until-you-get-a-result type fishing. Yes, it’s lovely to catch pound plus roach and perch of double that or bigger. But if you can get lots of bites in between, it’s so much more fun.

It has been enough of a conundrum just deciding where to do this lately, I have to say. 90% of my sport has been within the local five-mile limit, but you do quite quickly exhaust the options when you have a weekly column to write. So what do you do? If I was in building or driving, nobody would bat an eyelid at travelling an hour or more.

A sensible option seemed to be Goodiford Mill, around fifteen minutes from home, with digital ticket sales and no need to stop on the way there or back. The main match lake and carp lake here both have big perch and roach to target, along with plenty of variety. In fact, I’m baffled why so many venues turn lakes into a predictable soup of nothing except carp, because you can’t beat variety! Do these anglers eat only Weetabix for breakfast every day of their lives, or only go to Butlins on holiday? Whatever floats your boat I guess.

With no maggots available for what seemed like an age, two old favourite baits have been coming out: worms and bread. What lovely, simple fishing it has been, too. I had a nice session waggler fishing bread on the carp lake, and another using simple chopped worm to snags using pole tackle on the main lake.

On both occasions, I had great sport, with rapid-biting roach and also the odd chunky perch. Keep an eye on my Angling Times column for more angling notes- and book a date at Goodiford Mill later in the spring for some great mixed fishing!

Of course, the other great thing about the angling year for any all-rounder is that as one season or opportunity ends, another pretty soon begins. This is another reason why I’m a little baffled why anyone would want to pester pike in July (a pretty selfish idea on most waters) or fish for nothing besides carp on a permanent basis, but I digress.

In fact, a lot of those annoyed about the close season could do themselves a huge favour by grabbing a fly rod. If you fish for trout, the new game fishing season is every bit as exciting as June 16th and I cannot wait to get out on a little stream somewhere in April. 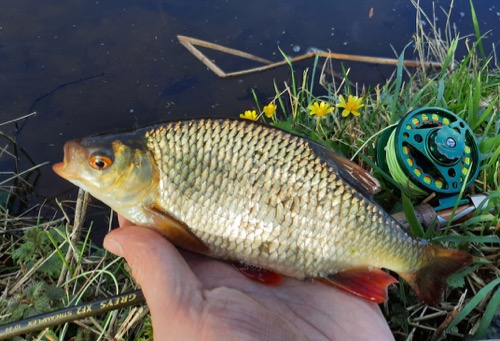 In the meantime, though, I’ve been getting my eye in by chasing local roach and rudd. Any water where you can find basking fish in clear water will be ripe for this in the coming weeks on any venue not subject to the close season! The only slight challenge is in the face of sunny weather and the iffy period of early spring when the water gets a green tinge to it.

Nevertheless, if you can find the fish it’s well worth persevering. I’ll be writing more about this in the Angling Times shortly, but so far so interesting. One great shout I’d give anyone trying it in the next few weeks is to take plenty of small, soft hackled flies with you- including some with an extra dash of colour to beat any spring tinge of colour. 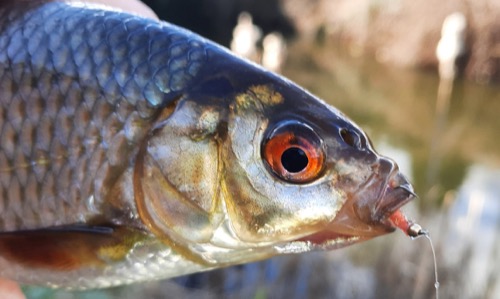 Two really solid performers so far have been flashy Diawl Bachs and Spiders for the rudd (try a fine but flashy rib of red or pearl) and a faster sinking Micro Pink Shrimp for roach (above). Hook sizes are 14s and 16s typically- but if you’re stumped you could always order a few flies from my shop (new stock coming very soon!).

Last but not least, I’ve also been working with John Deprieelle to produce some short instructional videos for Turrall. No rocket science here, but some very useful little tips, from a really easy way to set up a leader for two flies, through to small but important ways you can tie stronger knots and detect more takes when fishing!

Other current stuff and further reading…

For anyone interested in my other projects, there is (as usual) a lot going on right now! I continue to work part-time for the Angling Trust and producing blog posts for Lines on the Water– do check it out, because it’s completely free to read and has a nice mix of content if I dare say so myself. Recently we’ve been covering everything from seasonal watercraft tips to ways the angling world is fighting back against litter and single-use plastics.

Those of you on Instagram might also enjoy following a couple of accounts. I’ve recently re-launched my own profile (@domgarnett_fishing) recently, if only to keep sharing some of my news and photography.

Meanwhile, I’ll also be doing more for Flies Online (@flies_online) who are a company that stock some of my own flies for coarse fish, among many others. Hopefully, I’ll also be sharing some interesting fly patterns and step-by-steps on their Instagram account.