In what is still a tense and strange world at present, being able to fish again has at least helped to get a little normality back in the picture. With house move preparations, childcare and ongoing restrictions, though, it has been a case of making the most of what’s local and most likely to produce action at short notice. 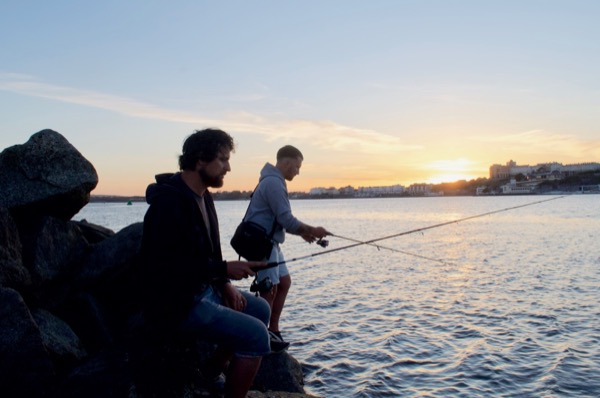 At least one advantage of getting longer in the tooth is that years of local knowledge and a wide network of fellow anglers certainly helps with spending your time wisely. Perhaps just as well, because as experience grows it can feel like free time shrinks!

The covid crisis has also introduced some welcome stoicism, too. Gone are the long distance trips and bigger ambitions for articles and catches. To be quite honest it’s a bit of relief, because we all need to take stock, lose the pressure and hit the reset button sometimes. And I’ve been doing just that with some simple but very satisfying fly and LRF fishing lately.

On each recent occasion, I’ve had under two hours of actual fishing. Never mind timing my visit with the rise, top priority has been to hit that sweet spot when the baby is asleep and the wife fancies a walk.

These sessions tend to follow a similar pattern. When every minute counts I don’t waste much time on difficult spots such as the smooth water or bits that get locally hammered and the trout are picky. Instead, I go straight to the areas with more boisterous flow or deeper water, where it’s a matter of getting stuck in right away. Literally, it’s a case of wade in and either get a quick hit or move on.

Inevitably, I start with a beaded nymph, simply because a size 18 Hare’s Ear is so wickedly effective and I need to feel the pull of a fish! One or two greedy trout later, it’s pressure off and I instantly switch to single dry fly. Best of all in hot weather, I go straight for the faster, bouldered bits of river and try a bushy, easy to spot dry that can be fished with zero fuss (a size 14 Hi Vis Elk Hair Caddis is perfect).

In the really broken water,  I’ll fish very quickly on these short sessions, making a cast as little as every ten seconds or less, simply popping the fly into pockets and gaps with barely any fly line out. It’s not exactly refined fly fishing, but this is my absolute favourite style of fly fishing on the small streams. Not only are the takes instant and brutal, it’s such excellent fun searching dozens of little nooks and crannies- and it becomes a sort of flippant game to see just how tiny and inconspicuous a patch of water will produce a fish. Yesterday was typical, the most measly broken pocket producing a half pounder that had no right to be lurking in such a sardine-can sized lie!

Most surprisingly of all, though, I have packed up each time after only a modest session and felt genuinely satisfied and happy to leave it for another day. I’m not sure I could have said the same, hand on heart, ten years ago. But in these strange days, my aims have shifted.

This has been a good lesson for all angling I find. Each of us has their own limitations on time, locations and freedom. Why, then, feel short changed or compare your lot to the latest Instagram feed or the  next man’s catch of the season? It’s up to each of us to value our own angling, on its own merits. And on that basis, success just means seizing the hour and relishing every cast and every fish.

Blennies and wrasse in the best of company

Another excellent method when it comes to making the most of just a spare hour or three is LRF fishing here in Devon. With virtually no preparation time at all, I can be on the coast and fishing in half an hour flat, which is a massive help with family life. Make it an early start and it’s possible to fish a decent session and still be home for lunch- which was exactly what I did this week. 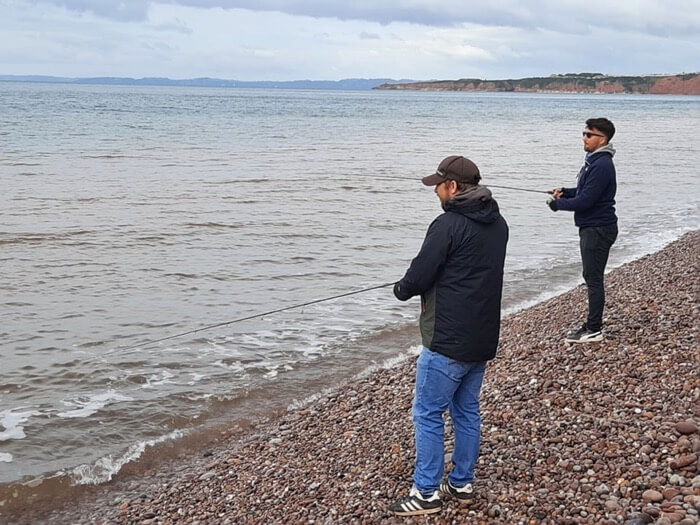 As anyone who has grabbed my latest book Hooked on Lure Fishing will have seen, this branch of angling is highly sociable and is all the richer for its thriving, refreshingly open, network of anglers. With no exclusive venues or one upmanship, I’ve yet to find a fellow LRF-er that I didn’t get on with and hopefully this shows in the book. Various talented anglers helped with photography and species notes from their neck of the woods – and so it seemed criminal that I had yet to fish with LRF addict and YouTube film creator Richard Salter and only very recently done so with blogger and species hunter Ben Bassett, two very accomplished fellow Devonian lure anglers who you may already know.

In any normal circumstances I’d have shaken these chaps warmly by the hand. But in true 2020 style, it was more a case of a friendly nod of the head as we met up in a random carpark in Budleigh Salterton. Probably just as well our chosen weapons for this sort of fishing tend to be around the two metre mark!

Quite well known for its sea fishing, Budleigh was the place I caught my first ever mackerel, circa 1992. With reports of odd gurnard showing, I was excited to return with much lighter tackle than the beachcaster of those days (although with the lack of barber services due to lockdown, I have a similarly terrible haircut).

The whole topic of LRF fishing with metals is a fascinating one, I find. Most of us will have caught the speedy, midwater fish like mackerel, scad and pollack on these lures, but using them on the bottom with a slower, bounce-the-sea-bed style jigging retrieves is another ballgame. I must admit, it still sometimes feels weird to me. I also tend to tip my metals with Isome- often converting lures where necessary.

Not so for Ben and Rich, though, who have had some excellent fish, from greater weavers to turbot, by fishing plain old untampered with metals across the bottom. And with the gurnard still a fish I’ve been desperate to catch on a lure, I was most interested to join them.

A couple of hours in, however, and fishing right through high tide, Richard’s lost tiddler was the closest we came to a fish. Annoyingly, I’d also decorated the sea bed with a couple of my choice metals ( I really must try a weaker link from lure to hook next time- a trick that has spared me losses before!). Even the local bait anglers, after bass and the larger dogfish species, hadn’t had a touch- and so we decided we’d swiftly move on to Exmouth. 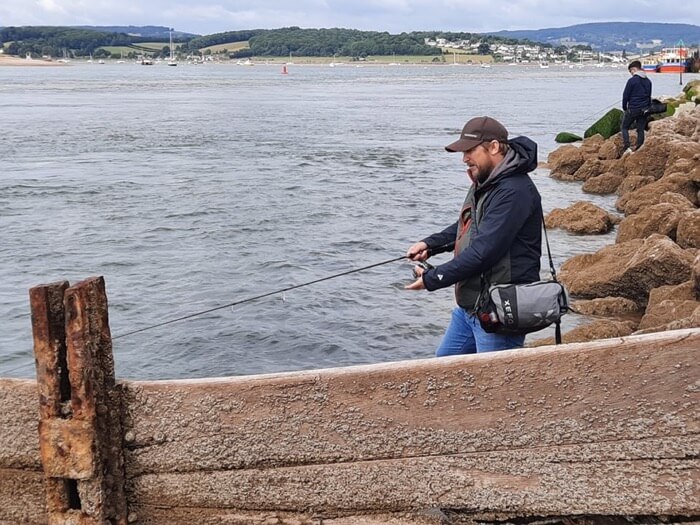 A smart plan, it seemed. Although most of the Harbour is out of bounds these days, there is an extensive area of boulders and rocky little pockets nearby that is always worth a blast for mini species. Weirdly, the concept is similar to my trout fishing earlier in this blog post on that level; you aim for the little sheltered bits of space in gushing current and as often as not, there’s a fish hiding.

In no time at all, we were getting bites. At least Ben and Rich were! Richard suspected toothy fish, as his lures were coming back properly savaged. Pretty soon, chunky blennies came our way, before a rather splendid half pound wrasse for Rich (the first of two of this size, that could have been twins). 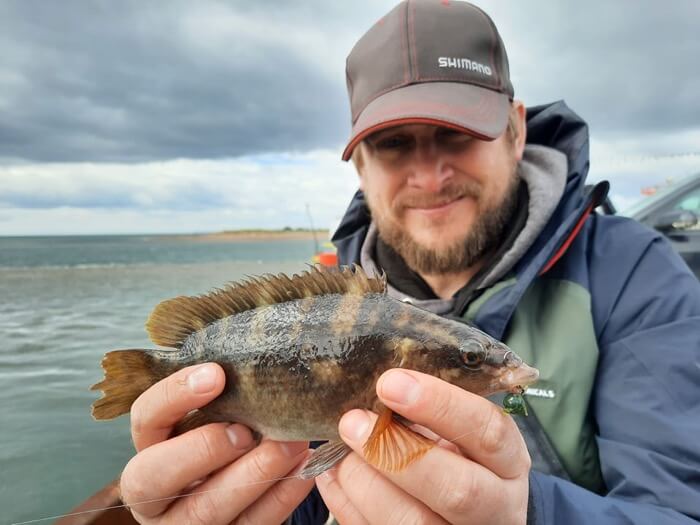 For my part, I was playing catchup until I changed rigs- something I should have done earlier! The difference between a size 8 jig and a drop shot rig with a size 16 carp match hook was immense. The tippy tappy knocks instantly became much more positive bites and I went from frustration sto  hooking and landing several fish in a matter of minutes. These included a beautiful little corkwing wrasse and not one but three cracking tompot blennies on the same, rather dishevelled looking, piece of Isome. Note to self: change rigs earlier next time it’s not working. 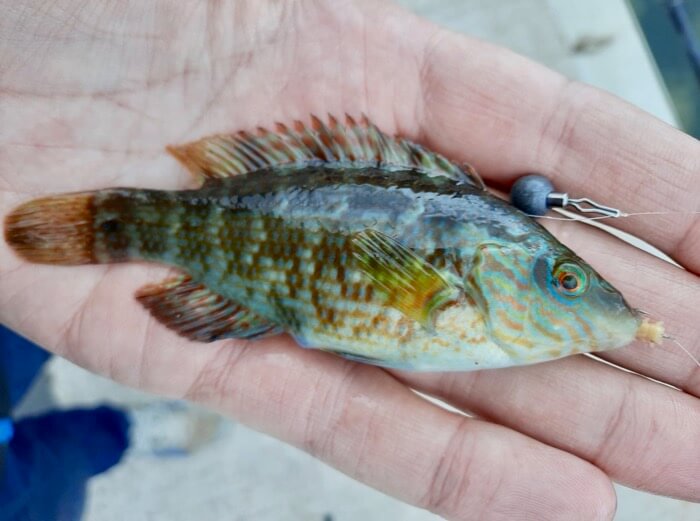 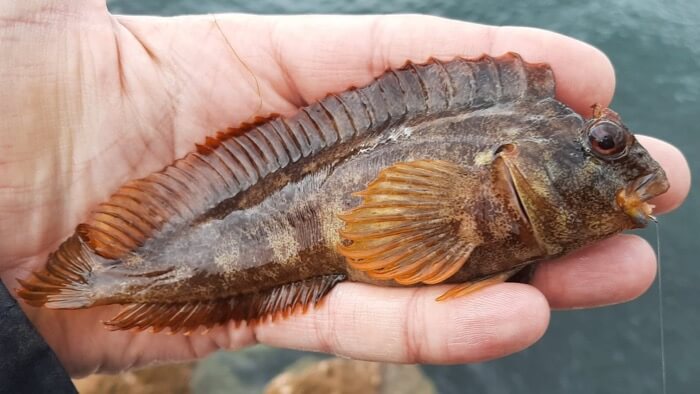 After that, we made our way further down towards “Clocktower Beach” and the last of the rocks, where it became evident that we had hit blennie central. At one point, Ben had become a kind of Pied Piper of blennies, in fact, catching a cricket score of shannies. 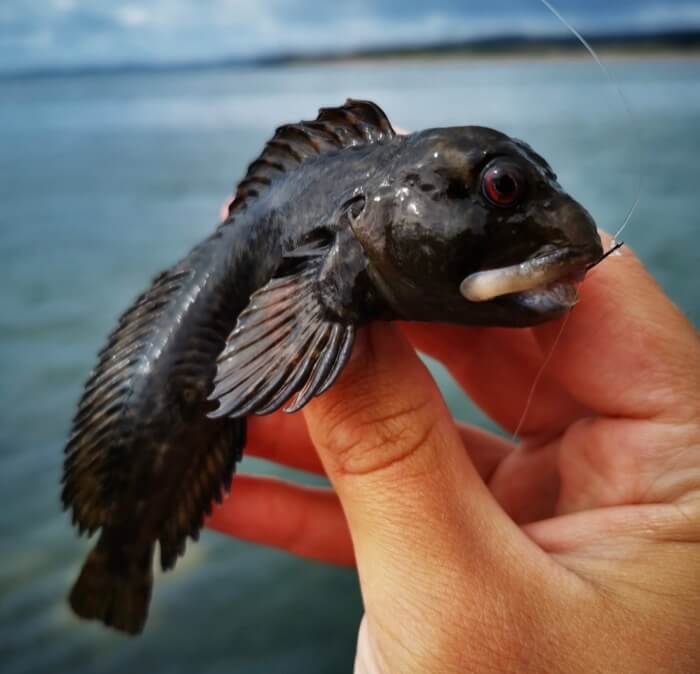 Ok, so they don’t get the specimen blowhards of the angling world excited, but blennies are really cool. Some of them were almost black (as you can see from Ben’s pic above). Others had reached that stage of late blennie-hood where these creatures start to look a bit like retired wrestlers, with big mouths, bad backs and a sort of sinister quality to make up for their faded glamour. And boy do they bite savagely! We joked that anyone falling into the sea here would rapidly be stripped to the bone, so bang up for it were the ravenous little sods.

The weird thing was the absence of other species. I quite fancied a flounder from the clearer patches of sand, but couldn’t find anything. And you’d have put money on a sea scorpion or three turning up, but they just weren’t playing. Nevertheless, it had been excellent fun and a great excuse to meet up with Rich and Ben.

Here’s hoping the next trip to the coast brings another surprise or two anyway, because I’ve well and truly got the LRF bug back again this year. Of course, another benefit of short sessions is that they don’t burn you out like an entire weekend slog. If anything, you’re even keener to get out again as soon as you can.

Other recommended reads and cool stuff this month…

To finish up for now, I also wanted to give you just a quick heads up on a handful of other bits to read. If you enjoy LRF fishing, I’ve written up a recent trip looking for topknot with Ben Bassett set for the Angling Times later in June. They are a truly bizarre species and the pictures alone were eye-opening!

Of course, you can also see a whole range of weird and wonderful fish species on Ben’s own excellent lure fishing blog, which is one of the best on the net right now.

I should also mention that if fishing footage is your thing, Richard Salter’s LRF films are a great watch, with lots of venues and species to watch and fuel your own adventures. Click here to see his videos.

Until we meet again, stay stafe, keep calm and enjoy every cast you get.