Home » Blog » From Chew Valley perch to chub on the fly

As excellent as so much of it was, another summer feels like it has been and gone all too quickly. Everything is damper and cooler as I sit here in the last evening light and reflect on recent events. I feel weirdly both fulfilled, but also as if I could and should have taken a few more days off to enjoy the sun on my back.

It has been the best and the worst of summers, with the joys of fatherhood and the pain of chronic toothache and the headache that is having a “new” (well, old, but newly aquired) house. But in the fishing world, what really stood out in August and September? Here’s my attempt to catch some of the best recent-ish bits.

There simply aren’t enough days to do everything in the fishing year, but I’m glad I turned my attention to some film making again. While I am at my most comfortable as a writer, it’s good to occasionally do something different- and with such great sport after chub on the fly, especially, it felt like a short film was well overdue.

Getting footage of chub taking big dry flies is no formality, but John Deprieelle gave it an excellent shot. Well, I’ll let you be the judge, but the new film is now up and running.

So much other water has gone under the bridge I don’t quite know where to start next, but the guided bookings have kept coming and been hugely rewarding.  I’d been on such a summer roll, in fact, I feared that sooner or later there would be that tough day when someone blanked!

Other than that, fishing has been a good distraction from weeks of terrible tooth pain! With no dentist willing to see me here in Exeter, I eventually took the step of going to family in Poland to get “fixed”. The less said about the two and a half hours and a stubborn wisdom tooth, the better. “Now you know how the fish feel” said the wife. I was in too much pain to retaliate with anything beyond a “hmmmph”. 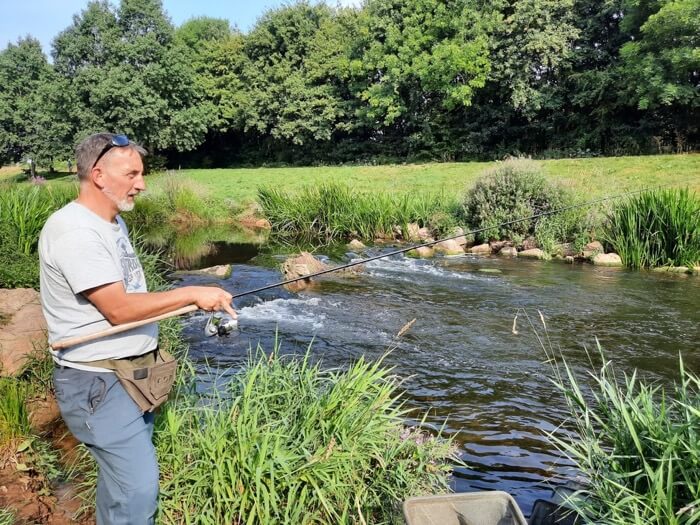 At least lots of fresh air have helped since. Where do I even start with the best bits of late summer guiding? Paul Blake (above) had an absolute smasher of a session on the River Tone, for one! He’d scarcely fished a river since being a kid, but soon got to grips with the basics of stick float fishing. 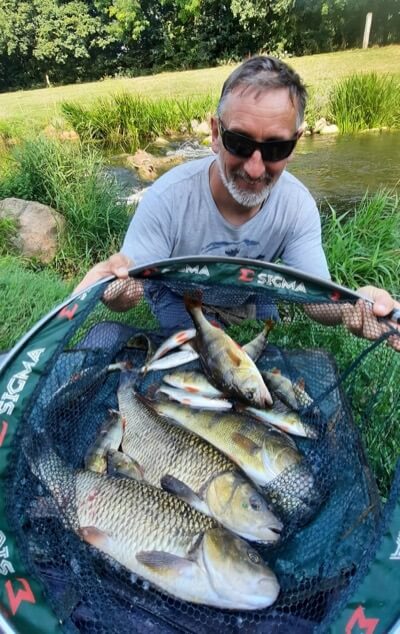 I got the right swim for him, anyway! Regular loose feed and careful presentation are the key here, and he had a cracking netful, including some absolutely solid perch and chub. And if that wasn’t enough, we also swapped to fly tackle for a final couple of hours, hitting into some more lovely chub and even a few rudd on the canal. 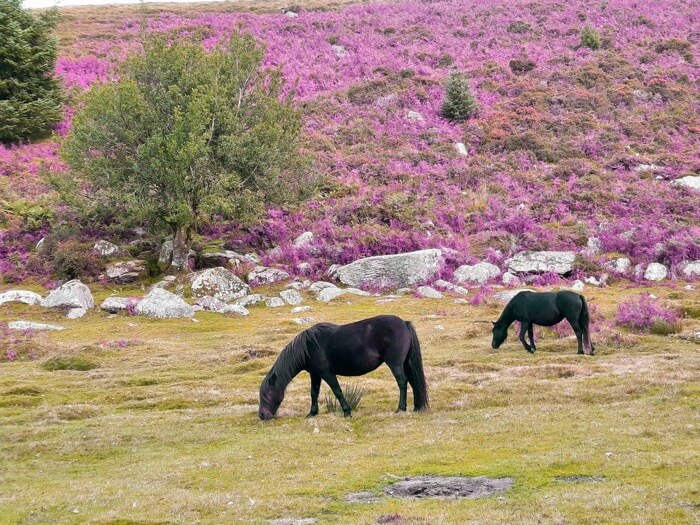 The session that felt like the biggest win was a final guided fly fishing trip to Dartmoor National Park (above), however, for one guest’s special birthday treat! Kerry Norman had been gifted the experience by her sister, having hinted over several years that one day she’d love to try fly fishing.

The river was beautifully sunny, but the pictures don’t give you the feel of the brutal easterly winds we faced, which gusted at over 30mph! Nevertheless, I knew some more sheltered spots around Bellever, where we might just have a chance. 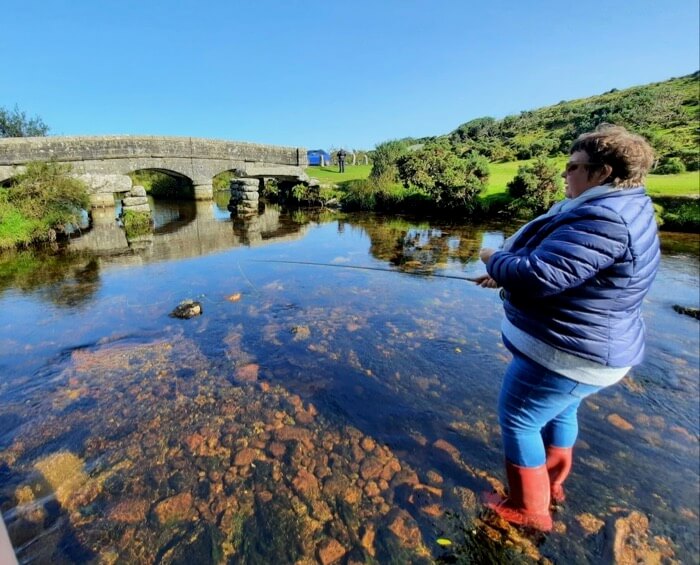 Kerry was brilliant fun from the off. You have to be careful as a guide; some people tolerate coarse humour but others don’t, just as some prefer gentle direction rather than more open criticism to correct their casting. On this occasion, it was clear from the first minute that it would be a day of relentless Mickey taking and laughter, along with a serious attempt to catch a fish in less than ideal conditions!

By lunchtime, the family came down with a picnic. She’d taken to casting a fly impressively well, given the wind, but we still didn’t have our trout. A couple had risen but been so lightning fast we didn’t connect. Could we break the deadlock in the afternoon?

The conditions were little better, but it was immensely satisfying to see my student keep trying. Sure, we lost the rhythm of the cast occasionally, but by giving little pointers, Kerry got right back into the zone at the right time, as we found a favourite rocky little run of steady, deeper water.

A few minutes later, we went from frustration to complete elation. In fact, the first trout was a beautiful moment when everything came together. The cast straightened beautifully, the fish rose and the rod bucked. I think I was as elated as Kerry- and given the blustery conditions and the amazing progress involved you can forgive us for celebrating wildly! 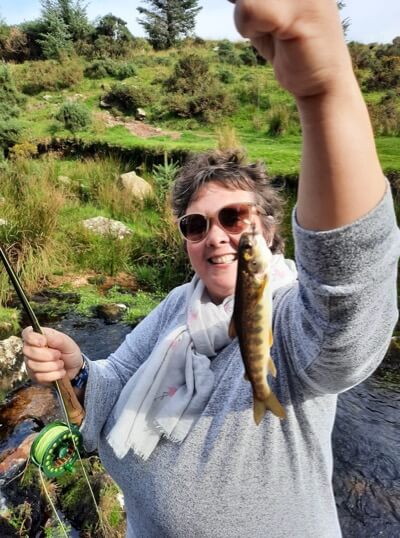 Not that our rasied voices put the fish off in the hiss of the wind- and she made it a brace in just a matter of five minutes later. That was about it for the afternoon, with not a lot else rising, but it simply didn’t matter. She had gone from a raw beginner to picking off two beautiful, wild fish on the dry fly. I think “pleased” was an understatement for coach and guest alike!

Days like these are exactly why I love guiding. And while I cannot guarantee a catch on every single session (“no fish, no fee, wasn’t it?” Kerry teased me), I will always put my heart and soul into giving you a fun, successful day out. And while river trout are now off limits, it’ll soon be time for pike fishing. See my guided fishing section for more details.

As for the rest of my own recent fishing, I hope you’ve been enjoying my “Last Cast” column in the Angling Times. There have been no shortage of talking points, but it has been a time of quite sensational perch fishing. I had an absolutely wonderful early morning session on the Somerset Levels, but the real cream of the fishing was an accidental detour on Chew Valley Lake. 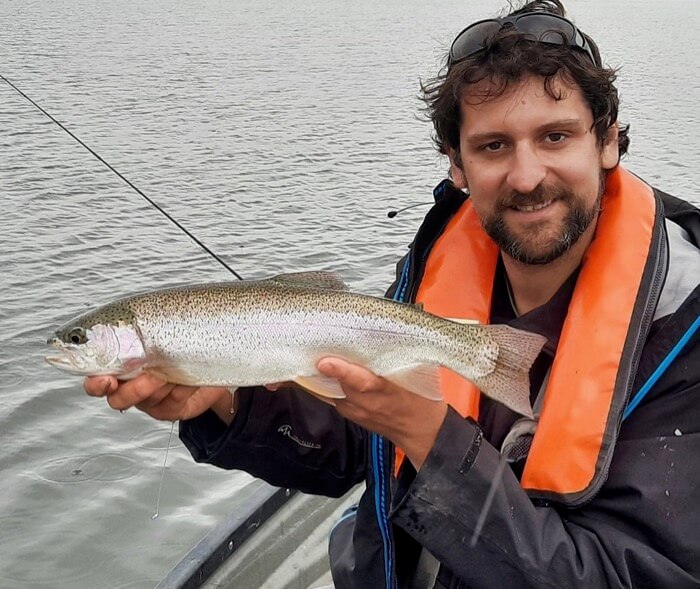 I’d been getting a feature together with top competition angler Mark Miles on the cusp of the Cortland Team Championships, which you’ll be able to read in Fly Fishing and Fly Tying magazine soon. It had already been a fabulous session with lots of trout on dry flies and washing line tactics, when we noticed fry being pulverised in a weedy bay. 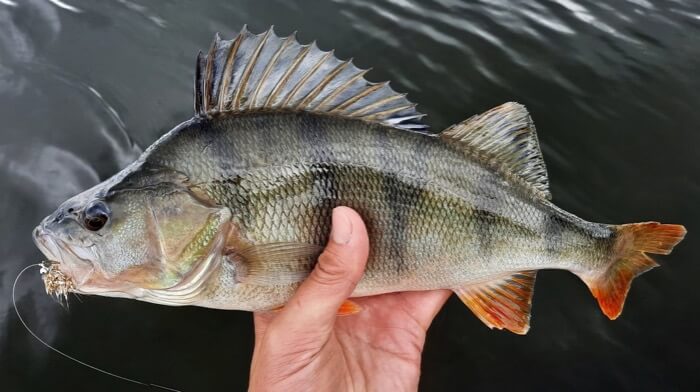 Credit to Mark for being a good sport and a man of wide tastes, because perch are worth nothing in a fly match- but boy did we have an incredible hour or two with these fish! They were smashing up just about any fly we tried, with dozens of fish averaging about a pound and going to over twice that, even if we didn’t find any real monsters. Dreamlike fishing! 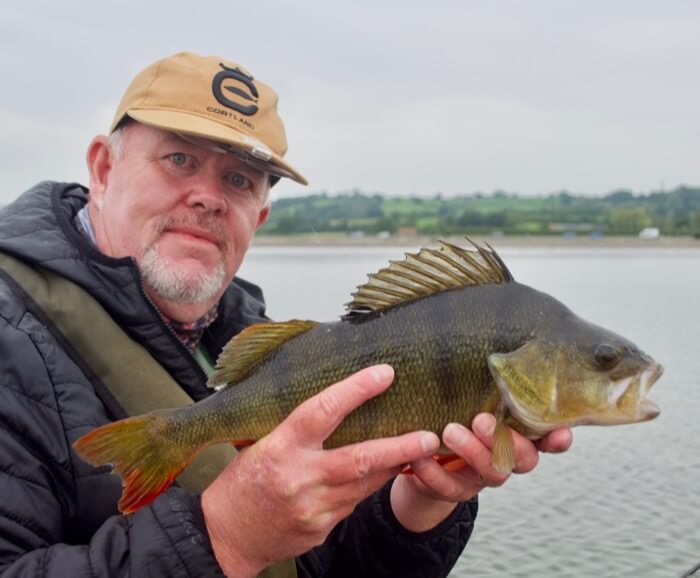 Nor was my luck out a few days later in the final league match with Tiverton Angling Club at Lakeside Fishery, near Exmoor. You can read the full account in the next Angling Times, but suffice to say it was a crazy, eventful match!

For the first four hours, I was getting absolutely stuffed from the neighbouring pegs. With just ounces of bits and one lost carp, I was nowhere until a bonkers final forty minutes and two arm-aching carp for 27lbs! I have never been as nervous in a competition, knowing how critical these fish were and hanging on for grim death with gear that was right on the edge of what it could handle. For anyone who’s only ever played big fish on heavy gear rather than a pole, the difference is like abandoning your car and going down the motorway on a go-kart at 70mph. In a match situation, slightly terrifying! 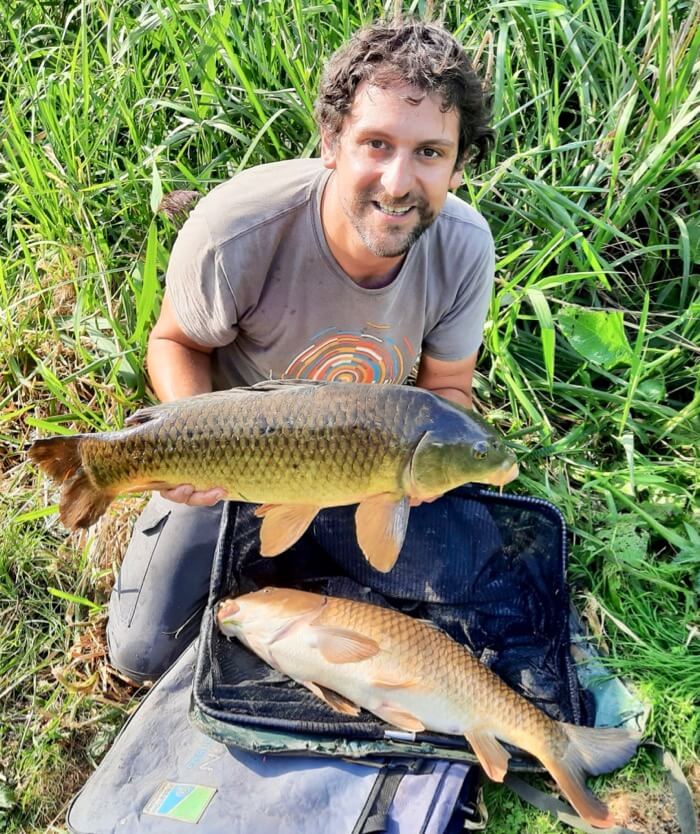 I will never forget the final, biggest fish, in particular, which took fully 20 minutes of knife-edge battle to land and was netted with just 60 seconds remaining! Talk about squeaky bum time… I still cannot quite believe these fish, which helped me to second place in the final league standings.

Finally, you can also find some other great free and paid content from various sources this month! Take a look at the Lines on the Water blog in particular, where I’ll be reflecting on some of the talking points in what has surely been the biggest summer for fishing in twenty years! 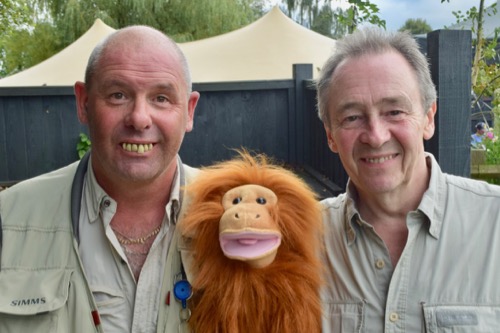 For those of you who are Angling Trust members, you can also look forward to my cover feature, where I was lucky enough to join Paul Whitehouse along with a lucky competition winner and his mate on the River Test. A lovely bloke and an unforgettable day with lots of laughter- but that’s all I’ll say for now!

If you’re not a member yet, why not sign up? Yes, I know, it’s  a tough decision to spend a matter or pence a week to support the only organisation fighting for angling on 101 fronts, from groundbreaking community projects to national campaigns on everything from fighting pollution to protecting fish stocks.