In spite of all the difficulties this summer, there has been some welcome optimism in the fishing world. After being rested for many weeks, a lot of fisheries have been on fire! And what great news in general for angling that we’re seeing a spike this summer. In simple terms, the more people buy a rod licence and get day and season tickets from clubs and fisheries, the more money goes into protecting and improving the fishing for everyone.

In my own world, the sheer number of requests I’ve had to provide fishing lessons here in Devon and Somerset has been terrific, particularly with learn to fish sessions for kids and families. That said, I’ve also delivered some more specialised lure and fly fishing trips. I certainly do my best to cater for all tastes and abilities: check out the guided fishing section of this website for more info.

With covid, it has meant some adjustment on my part, admittedly, in terms of trying to keep things as safe and well organised as possible. However, pretty much every session has been memorable for all the right reasons, with some wonderful surprises along the way.

Family fishing lessons in Somerset… with a twist in the tale! 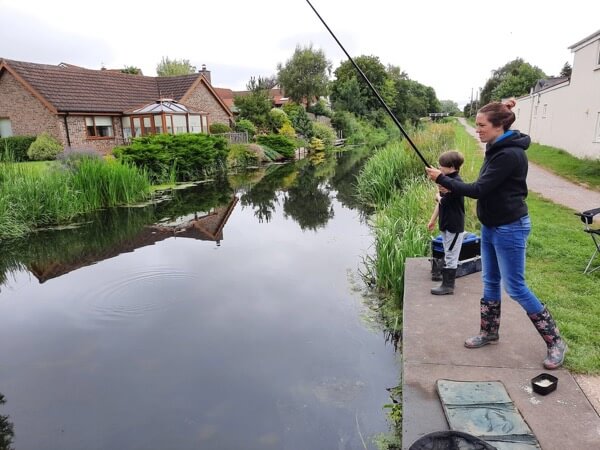 One recent session that particularly stands out lately was on the Taunton to Bridgwater Canal with local mum Sue and son Aidan. They wanted an active session picking up basic skills and getting plenty of bites. Commercial fisheries can deliver this, but with a season ticket for youngsters just a fiver with Taunton AA, I felt that the canal was an even better bet.

I took them to a spot in Creech St Michael, a pretty bit of canal, where there are lots of small rudd, roach, bleak and silver bream. While it was a tentative start with hand sanitiser and extra kit carefully cleaned and prepared, we were soon up and running. Funnily enough, in some ways the distancing helped get our learners doing things like landing and unhooking fish themselves, lessening the temptation for the coach to do too much!

You really can’t beat simple whip and waggler fishing for catching lots of small fish and the odd bigger one. Little and often feeding soon had them queing up- and it was fantastic to see Aidan’s enthusiasm and rapidly growing fishing skills. From striking and handling fish, to using a disgorger, he was doing it all himself- brilliant stuff, because as a coach my main aim is to give people the confidence so that they can then go fishing on their own. 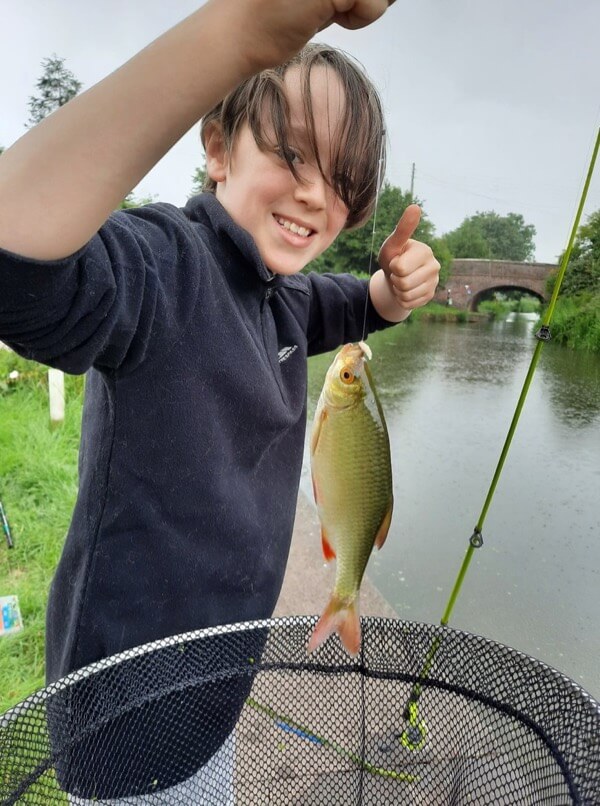 Getting into the habit of regular loose feed with maggots and liquidised bread, they caught lots of fish. In fact, by late morning, we’d had so many rudd, bleak and silver bream, all we were lacking was a real net-filler. And then fate seemed to intervene! I’d wondered whether the very clear water was making the larger fish a bit shy, when the weed cutting boat came through and stirred things up.

Half an hour later, Sue hooked something much bigger! The pole hooped right over and a couple of times I was sure the line would break. To her credit, though, she played the fish with great care and avoided that classic beginner’s mistake of pulling too hard. At first I suspected a big perch had grabbed the bait, or a pike had seized a small bleak. But then the culprit emerged- it was a superb, absolutely solid rudd! 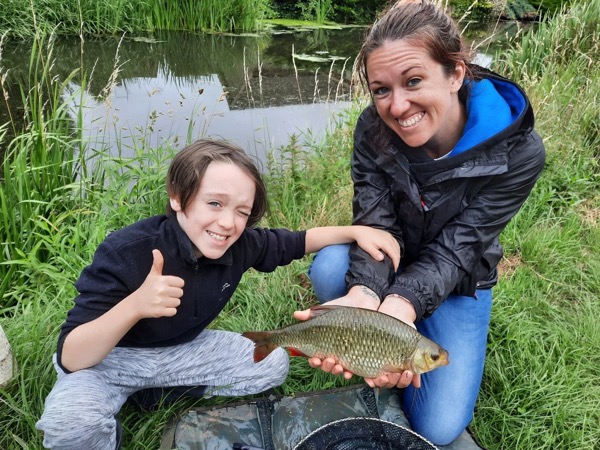 What a way to end the session and so well deserved. While I love it when kids catch a surprise net-filler, it’s fantastic to see parents rewarded. So often they put their young ones first, so it’s lovely to see them catch something special. At 1lb 8oz and in beautiful condition it was a fish that even the most experienced canal angler would be proud of. A memorable end to a great session.

Fly fishing for chub and grayling

Another aspect of coaching and guiding that I enjoy a lot is taking an angler who already has a fair bit of experience and showing them something new. When it’s a repeat booking, I’m even more pleased, not only for the vote of confidence but because it’s so pleasing to see an angler’s progression. 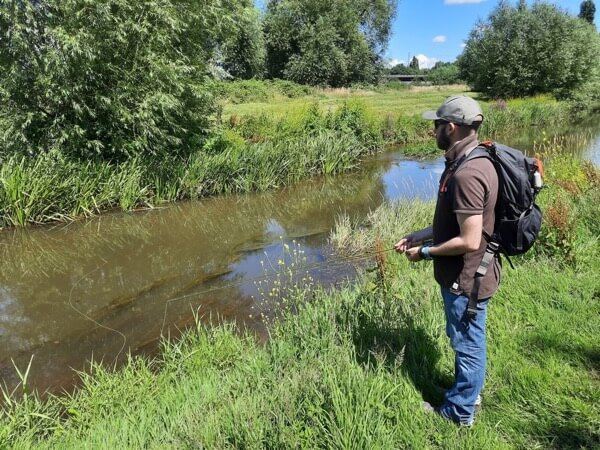 Ben Cheeld had enjoyed an excellent session with me for rudd last year, so it was great to see him back after a family member had gifted him another session. The original plan had been to get up to the edge of Exmoor for some grayling- but Covid restrictions put paid to that. Instead, we hit the Tone closer to home, where I knew he’d have a good chance of a grayling along with cracking chub to go at.

It was a case of roving with a 4wt outfit for these fish- and not sticking around in any one spot too long. Indeed, you tend to quickly get a chance or two, before they get wise. Big dry flies worked a treat for the first hour or two, either dead drifted or throwing in a “skate” or two to help make their minds up. This works beautifully if you get fish that close in but won’t open wide- although you often have to time the twitch just the right moment. 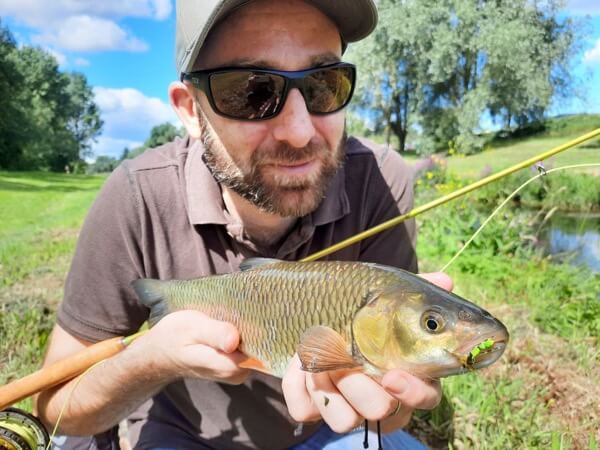 The pick of the flies were three from my terrestrial and chub flies, a Chopper, Stimulator or Grasshopper. Takes were very decisive and the battles were dirty, with the chub aiming to snag Ben on the near bank! It helps having a friend present- and a good tip here is to sink a long handled net (and my handle is over 4m to get at the tricky spots!) well before the fish is ready. I find that by putting it in front of any inconvenient snag, you can often dissaude these fish for bolting under your feet at the last minute- a dirty trick that these fish often pull.

It was excellent sport, but as the day got brighter, we found the fish less willing to rise. This is where a second rod, set up for nymphing, came into play. A Spider Sedge, my absolute favourite wet fly for chub, kept them coming as they shied off the surface and the river seemed to get a bit muddier. 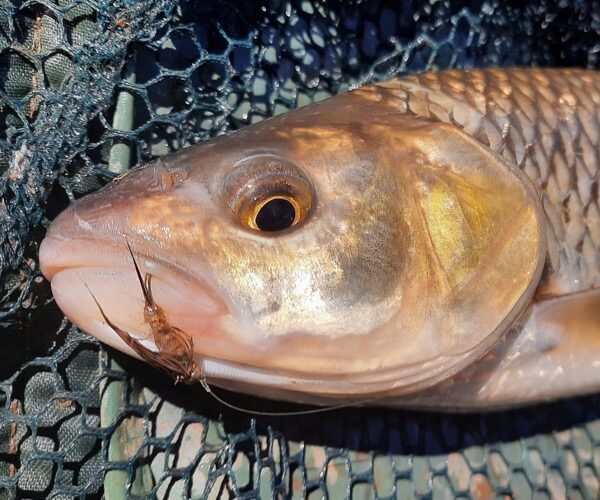 We also tried some faster sinking nymphs in the deeper currents- and in this case a small Pink Shrimp is as reliable as any fly on the Tone if you want grayling. My own versions are tiny size 16s which also work well for roach.
Before long, using a simple indicator and bug setup, Ben had his first ever grayling! 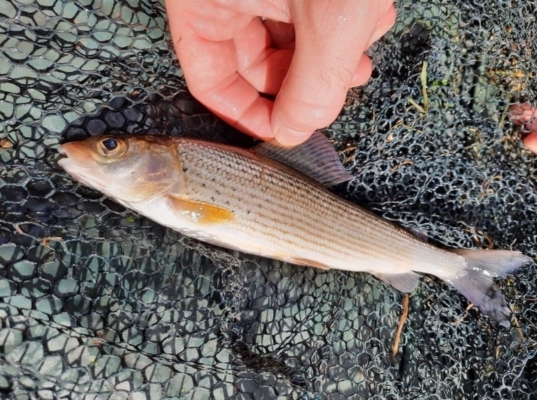 We might have had more, too, I guess, but those chub were just too mesmerising. I must say, I find them such a perfect fish in terms of difficulty; the better ones on any river are always catchable, but always wily enough to keep you sharp and coming up with new ways to fool them.

In the end, Ben finished with ten chub. Only a couple would have been below the pound mark- and we weighed the best of the bunch at 2lbs 10oz (although these fish always look bigger!). Excellent stuff and he also had a roach and a perch to add, both on the a sinking fly. 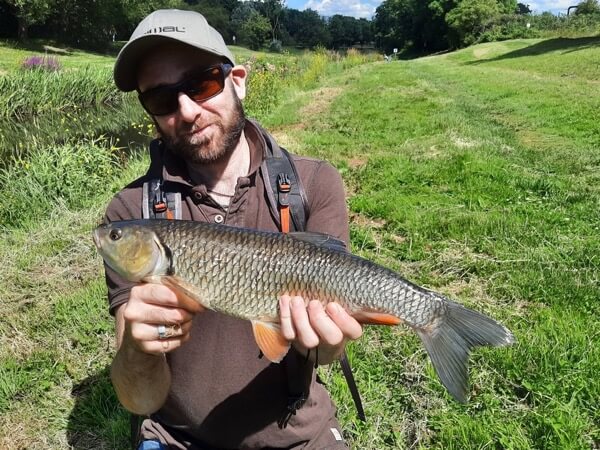 I seldom ever fish when I guide, but such was the quality of fishing that I couldn’t resist staying on for an hour or two once the session was over. I have to say that returning to the earlier hot spots, things had got much harder with a high sun and clearing water.

Out of curiousity as much as anything else, I spent the end of the session trying a small black streamer, a trick I usually only use in the winter for chub that refuse to rise. Contrary to expectations, the fish got smaller! I had two small chub and a whole slew of little perch for my efforts, not big but lots of fun. Even more bizarrely, I had a minnow that took my size 12 Black Woolly Bugger fair and square, chasing it and harrying it until it found the point!

Heading further west, to North Devon, my very next session could not have been more different, with a family group of four young anglers. With so many lakes and species, I always enjoy hosting guided fishing trips and family lessons at Angler’s Paradise, because it always has the capacity to surprise. 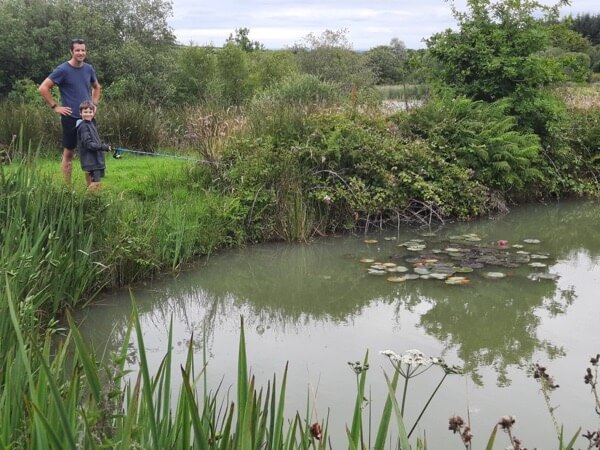 Overcast, mild conditions looked ideal for a crack at the promised to be a busy but fun-packed session on the Angler’s Eldorado day ticket complex. The top lake had plenty of space and I knew that we’d get off to a flying start with the hordes of pretty golden rudd.

And so it proved, with Zack, Daniel, Ava and Ava all quickly hooking pretty rudd and the odd perch on maggots. I set the younger kids up with simple pole gear, while the boys tried float fishing with rod and line, and basic waggler tactics. Much as they admired bigger fish swimming out by the island, I wanted them to get plenty of practice landing and safely handling small fish first. Pretty soon, they overcame their fear of maggots and fish and were baiting up and wetting hands to hold their own catches. 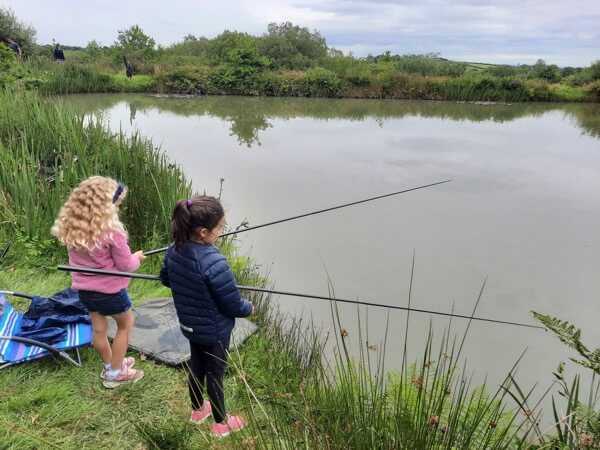 I always like to try and get my guests catching with their own gear, but I have to say this often takes a bit of adjustment! As is often the case, I found myself switching them to lighter line and smaller hooks; so often beginner’s fishing sets have thick line and massive hooks that are better for sea fishing than catching roach and rudd! Soon we were away though, and catching plenty.

After a quick snack break there was then a rain shower and my extra large fishing brolly became a base camp for a whole gang of anglers! Meanwhile, I started feeding some bigger baits to the island, where we’d seen some bigger fish.

In the end it took plan C to catch one, because try as we might, the fish wouldn’t feed eagerly from the lake bed. It was a floating bait they wanted- and luckily there were plenty of sandwich crusts left from lunch!

Using a very simple controller float plus barbless size 8 hook, a piece of crust reached the edge of the island- and everyone held their breath. Just seconds later, a big bright shape loomed and lips gobbled. I don’t think Zack and his dad could quite believe the power of the fish they’d just hooked! 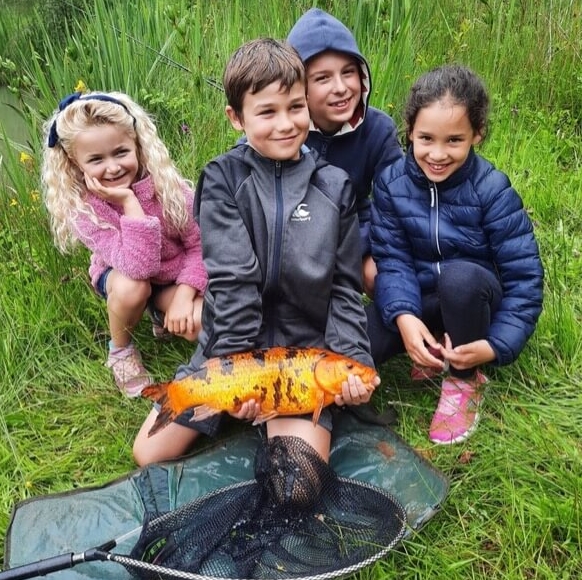 It took several minutes to land, with some fantastic, surging runs to make pulses race. But our fishing pupil did excellently, keeping a cool head and not rushing things. It was a solid koi. The only hairy moments were when the fish tried to rush under snags on the near bank- but it was to no avail as the line, and our youngster’s nerve, held firm. What a great catch- and what a great picture, as all our youngsters came to admire it.

Nor was it the last action either, as an even better pale while carp also graced the net, also fooled on a simple hunk of sandwich crust on a size 8 hook. This time Daniel landed it, doing a great job, especially with an audience watching on! Sometimes fishing really needn’t be complicated to deliver a great result- and I can only hope our four star pupils will follow this success with more great fishing adventures. 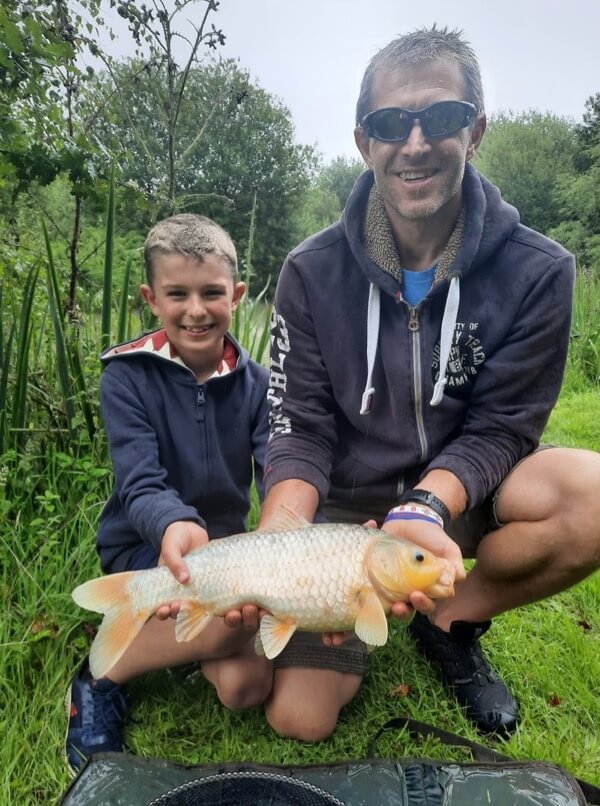