Even for someone who enjoys an unexpected turn or three in life and fishing, recent times have been baffling. Not just unusual, but Donald Trump press conference level weird and stupid. The fishing has often been a right slog, too, or meant tearing up existing plans just to get a bend in the rod.

So where do we start? Well, difficult conditions for fishing have to be put into perspective when the country follows up biblical flooding with the Coronovirus. It is just a pastime, after all. Even so, the levels of stupidity and misinformation alone are enough to make me want to leave social media permanently and just go fishing.

At least fishing, as many are pointing out, can often be a solitary pursuit where we don’t have to mingle in large groups or a whole pack of team mates, like other sports.  My club league’s matches are already cancelled, however, so yet again other plans might be required. To be honest, it has been such a difficult winter for both fishing and family reasons, I’m keener than ever to get out. First though, a quick look back at how winter finished…

Sometimes I think pike are my favourite species not so much because of that primitive charm, but because they are so reliable even in total-crap-come-take-up-metal-detecting conditions. I’d planned several river missions that looked great on paper, but with filthy, high water the canals got my vote instead.

Exeter Canal, in particular, is a venue I’ve drifted away from somewhat over the last few seasons, in part because there are so much better pickings elsewhere in less pressured surroundings! Even so, there comes a point every late winter when I want to empty the freezer and try for a decent pike.

After locating some fish with the fly rod (including a decent fish that wouldn’t bite), I decided to hit the place with bait. If I’m going to sit and wait a long while in one swim, I do like to try and boost the odds a bit and so my plan was to throw a load of shredded up old bait into two spots and fish popped up deadbaits over the top (a must with the permanent tonnage of year round weed).

Strangely, the canal was as busy as I’ve ever seen it on a wet afternoon. My first choice spot was taken by a tench angler, so I tried a bit further along, with one rod just into the main channel, another close in. And for two hours absolutely nothing happened. This is normal on Exeter Ship Canal, it must be said. I used to fish it with itchy feet, moving every 20-30 minutes. Not any more, at least with bait. Basically it’s find the fish, then sit and wait. Sometimes I feel like I should bring a copy of War and Peace, such are the gaps between bites.

I was just getting into that mental argument between reasons to leave versus reasons to be late home for tea, when I got a searing run on the bait cast slightly further out. The fish properly heaved too! When I saw it roll I was pleasantly surprised. Not huge enough to warrant the scales, but a nice, long low double. I also missed another late run in the margins that felt smaller, but I left a happy angler. The manky baits had been used up and I’d at least finished on a decent fish. 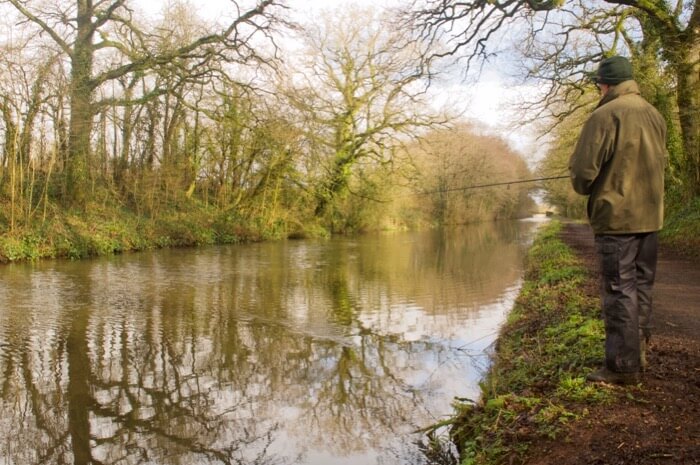 Otherwise, my main focus has been guided trips for pike. As often as not, these are with a fly rod somewhere on the Somerset Levels, but thanks to even more storms and ridiculous flood levels that would have been tricky without diving gear. So instead, I invited my next guest, Tony, to try the Tiverton Canal (above). A lovely setting where small but numerous pike can usually be relied on to provide some kicks, even in weird, mucky conditions.

Already a keen all round angler, Tony was newer to lure fishing and eager to see how to fish more effectively on the cut; the chief issue being the amount of salad! Hence I tailored the session to looking at the best lures and right approach for fishing in shallow, very weedy water.

Suspending, single hook lures tend to dominate my “Tivvy” box for good reason. Much as I love traditional lures, they pick up too much weed. Furthermore, you have to crank the typical plug or spinner in rather too quickly to make the most of casts that are rarely longer than a match angler’s pole. The now discontinued Storm Suspending Shad is still a belter (although my personal stock is running low now) but you can also do well on most soft shads, fished with a gentle, stop-start retrieve on a simple unweighted hook rather than the standard, weed dredging jig head.

An early couple of follows and hits immediately gave us confidence- but I was also keen to stress some of the finer points, such as using a higher rod tip to keep lure clear of weed, whilst trying to really hang artificials in likely areas and not rushing, in order to give pike plenty of time to lash out. I’m often startled at how overly quickly anglers race in their lures on the canals.

The tactical briefing paid off, too! Tony had a beautifully marked jack pike and in truth was unlucky not to catch two or three more on our half day session. The other valuable lesson was that an early start is a must on this canal. Much as both of us might have enjoyed a lie in, over half our takes came in the first 90 minutes. My other recent forays for predators have been a couple of trips across the Midlands. Ostensilby, to fill in the gaps between jobs up country. I love the likes of the Oxford, Birmingham and Coventry Canals though; the fishing is cheap and you have the chance of zander, a fish I cannot catch close to home.

Actually, on both trips I’d hoped to have a go at a lovely estate lake I don’t get to fish often, but after brutal floods it was as dirty as an election campaign, and so I had to settle for the canals. Even these were rock hard, though, with that undesirable combination of dirty water and cold temperatures. 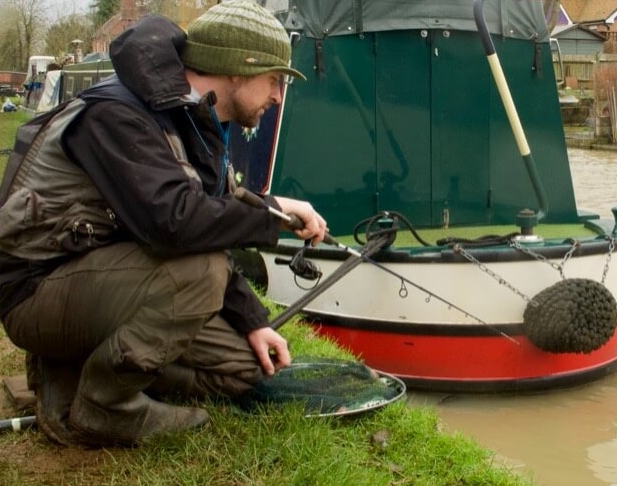 I managed to just about turn the first session round, by upping lure size a little and going with white paddle tails. Indeed, a white or super bright lure with a very large kicking tail tends to be my go-to formula for builder’s tea conditions. Not spectacular fishing by any means, but while the zander never bared their teeth, a nice pound-plus perch was very welcome. 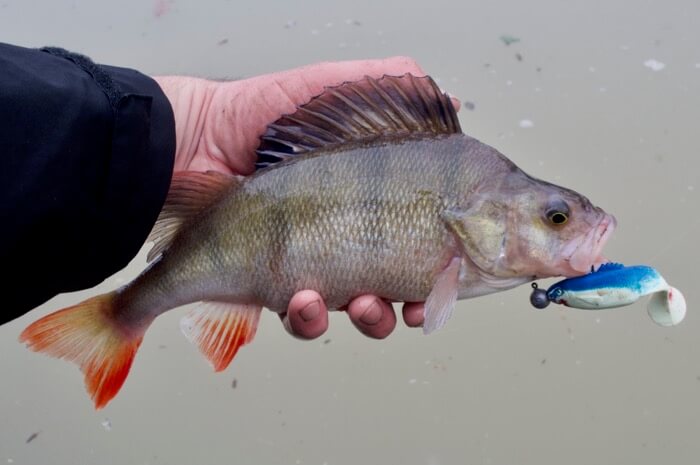 I probably would have caught more still with bait, I have to say, a method I really love when the chips are down is the drop shotted worm, a tactic I’ve recently covered in my Angling Times column. Yes, it isn’t pure lure fishing and the one method boys might regard me as a bit of a slag on this one. But boy can it work wonders when the chips are really down. It certainly takes a bit more patience than normal jigging, but taking a fine bladed pair of scissors and adding a pinch of “chop” at a time can be a real blank saver. And you’ve every chance of a big fish with a lobworm on the hook.

With a bit of luck, at least the worst of the wild conditions are now behind us and there is some sunnier fishing on the cards. This has to be put into the context of the current virus outbreak, however. Do stay safe and follow the common sense advice, because it’s quickly becoming clear that this is no joke or seasonal flu level outbreak.

That said, fishing could end up as the self-isolation method of choice for a lot of increasingly bored people! Part of me is already wondering whether fisheries will be busier than ever, especially if many of us have unexpected or forced leave.

So what am I looking forward to most? Well, as soon as the rains lay off and things settle, I’ll be digging out the fly rod and hitting a trout stream. In fact, you can read a nice new season blog article all about the hopes and plans of several well known anglers on the Angling Trust’s Lines on the Water Blog, where you can read about my favourite Devon trout river. 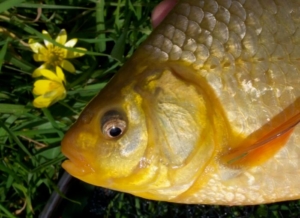 I also love spring because it means that species like tench and crucians come back to the fore. Talking of the latter, I’ve just had a fantastic day session for crucians at Luccombes Coarse Fishery recently (above). Keep an eye on the Angling Times for more, but this is a lovely mixed fishery with plenty of genuine “crus” for those of you who enjoy light float fishing.

Wherever your next cast is, do take care and look out for your family and neighbours (and please leave a couple of rolls of toilet paper for me) because it could be a strange, difficult few weeks and months ahead.