After another twelve months of remarkable captures, not to mention a lot of head scratching among the judges, it was Ian Gould’s perfect crucian capture, closely followed by Stuart Watson’s magnificent fly caught catfish which topped the 2019 Fly For Coarse contest.

In an exciting seventh year for the pioneering competition run by yours truly and judged by Matt Hayes and John Bailey, entries have been as eye-opening as ever. In fact, the 2019 shortlist of ten most remarkable entries included everything from a 33lb 8oz pike to a bullhead, along with spectacular captures in every bracket in between!

“It gets harder to judge every year,” said Matt Hayes. “I would like to take this opportunity to congratulate the whole group on an amazing portfolio of captures, any of which would cause me to punch the air in jubilation. The truth is that all of these captures are merit worthy and at times it feels as if we are splitting hairs to decide the winners. To catch huge barbel, perch, carp, catfish, crucian carp and other species on any tackle is tricky but on a fly it is so much harder, especially with the non-predatory species.” 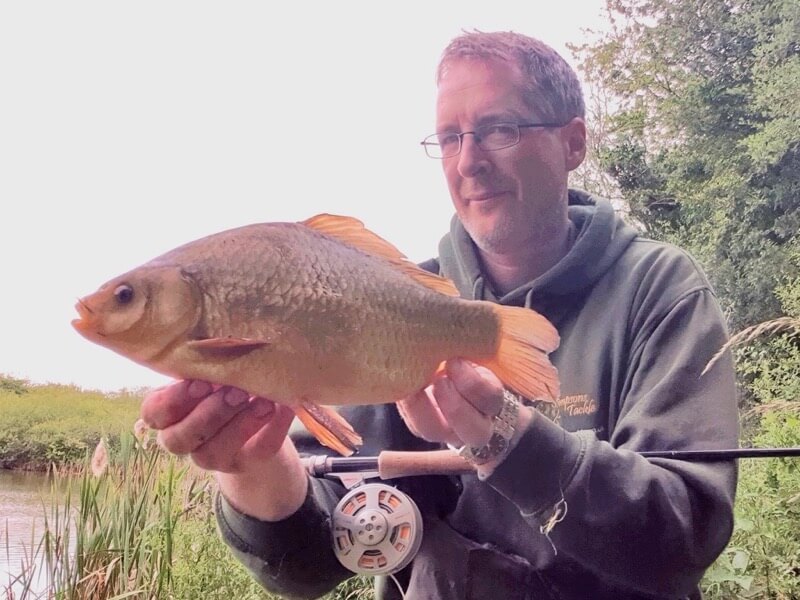 The contest has always been about new possibilities rather than a “heaviest fish wins” format, however, and so the judges had another thorny task to decide the overall winner. Ultimately it was Ian Gould’s immaculate 3lb crucian carp tempted on a natural fly has been deemed the finest catch of them all. Ian caught his fine crucian of bang on three pounds when he swapped the time honoured float fishing tackle for a fly rod at his favourite local lake in Cheshire.

“I turned up at the lake at 6:00am to see rudd and a few large crucians banging around under lilly pads,” said Ian. “At first I thought they could be spawning late but after watching them for a while they were clearly taking insects off the underside of the lilies. I was planning on dropping in on a trout water on the way home, so I had the fly rod in the car ready and went back to get it. I couldn’t think of any better, or other, way of catching them. On went a sedge (a size 14 G & H Sedge dry fly). I cast over the lilies leaving only a small amount of 4lb fluoro in the water and it was immediately hit by a small rudd. This luckily didn’t spook the fish so out the sedge went again and it was taken instantly by one of the crucians. After a great fight and a quick photo, it was weighed and registered dead on 3lbs. I even fancied a shot at another, but on the next cast another rudd took the fly, which was hit by a pike an quickly killed the swim!”

Beaten on a five-weight outfit, it is the biggest know crucian to be caught on the fly and it’s fair to say the species is a rarity on the method.
Judges agreed it was an awe-inspiring catch and a very rare feat. I’ve seen these fish rising before, but founf them very frustrating. It’s clear that they eat a wide range of insects, but they’re notoriously difficult on the fly- especially a dry! The only other captures reported to me tend to have been on “bait” style flies or bloodworms, so this is in a different league. It’s a wonderful, opportunist capture that just shows that we never know what might happen unless we try. The fact that it’s not from one of the usual southern venues but from the north, where fish of this stamp are rare on any method, is even more impressive.

Ian wins a custom ultralight 2# glass fly rod, specially made for the competition by Bill Smith.

“I love this whole scenario” said John Bailey, “and it’s made even more compelling by the fact I struggle to catch crucians on any bait known to man!”
Matt Hayes really had to wrestle with his verdict, as he was also extremely impressed with the catfish. “It’s a very tough call- but the crucian is a capture that epitomises the spirit of the competition. It’s about pure fishing skills and so just about edges it for me.” 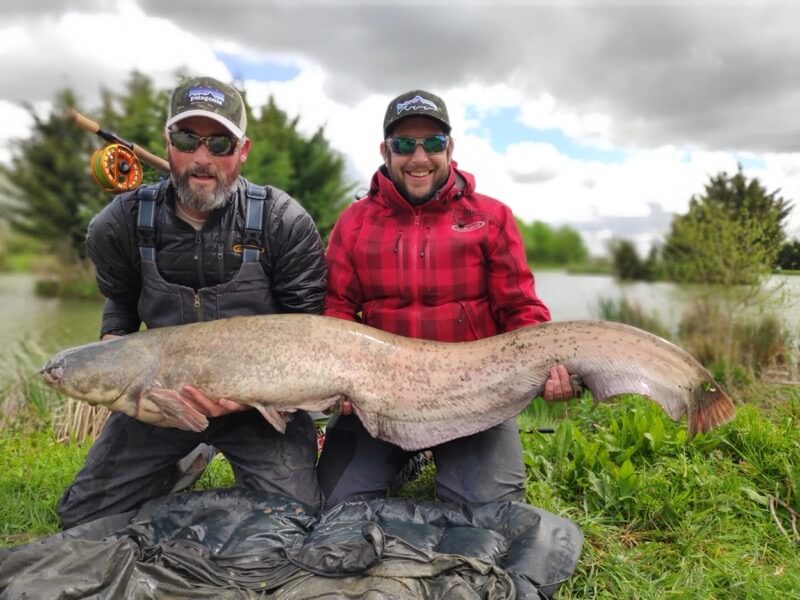 In second place by a wafer thin margin was an amazing wels catfish of 59lbs 3oz, caught at Dorset’s Todber Manor complex. Captor Stuart Watson used a ten-weight Deer Creek fly rod and his own 5” rattling black predator fly to subdue the beast, which put up an amazing fight. Alongside angling pal Danny Parkins, the two had planned to have a crack at the catfish for a while, taking ideas from European anglers and boldly applying them to the UK, where fly fishing for cats is almost unheard of!
“In shock!” is how Stuart described his reaction to banking the giant. “The weight and size were breath taking” he says. “I feel lucky to have battled such an amazing predator. It’s the best experience of my angling career!” He wins a Cortland 444 fly line of his choice.

“It’s an impressive capture” said Matt Hayes. “The catfish stands out because it is so unusual and large. The battle and thrill of hooking up on a fly rod must have been something else!”

As a predator fishing addict, this was my favourite entry- and among the most exciting captures we’ve ever had as far as I’m concerned. I love the fact that Stuart has taken the fly to a venue normally fished with boilies- and shown that even in these surroundings, catfish retain a mean, predatory streak. It’s an inspirational capture and something I simply must try at some point in 2020! Congratulations to Stuart and his friend Danny Parkins for being brave enough to give this a go where others wouldn’t conceive of such a plan, let alone show the guts and determination make it happen. Let’s hope more fisheries take note, because if the chances are there in the UK you can bet more anglers will give this a go in 2020- and I’m one of them.

Also in the running for the top spots were a whole slew of noteworthy fish, virtually any one of which would have been a worthy winner, the judges agreed. Jason Williams had a 39lb common carp on an egg fly- thought to be the largest ever fly caught UK specimen. Matt Roberts had a huge 33lb 8oz pike from a reservoir, the largest of a trio of fish of over 20lbs in the session of a lifetime. Meanwhile, former winner John Tyzack’s 14lb barbel on a large, scruffy nymph was one of an increasing number of recorded captures on the fly. Jack Welshman and Martin Smith both had perch of over three pounds, while Tim James had a surprise carp from central London canal and David West Beale had the mightiest mini species capture with a Tenkara caught bullhead. 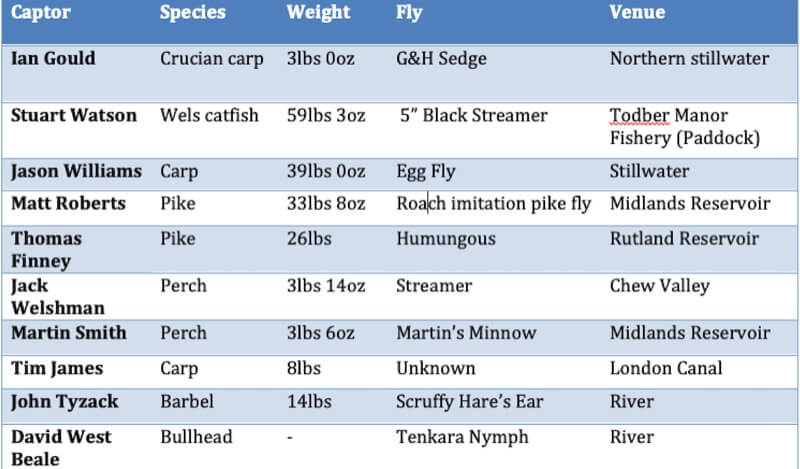 “It’s an amazing list and refreshing to see” reflected Matt Hayes. “These are notable examples of angling skill- and shows just how far this contest and branch of angling has come in recent years. Can you imagine, twenty to thirty years ago, if someone had asked you to go out and catch a catfish with a fly or even a bullhead? The words ‘almost impossible’ spring to mind! And yet here we are, now contemplating whether there is any species that is uncatchable with a fly. “

“It’s very hard to judge. Where participants live and access to waters has a big impact, for example. As time goes by, it also gets harder and harder to break new ground. In a nutshell, once someone has caught a thirty-pound pike or a catfish on the fly, every subsequent capture is regarded as ‘less pioneering’. Yet to the captor, its significance is hardly diminished by the fact that someone has done it before nor does it mean that time and technology have made it much easier, so these are still merit worthy and hugely impressive fish.

Non-predatory species are perhaps the hardest of all, with just a fly and no recourse to ‘chumming’. It can take hours of observation and an understanding of where and what natural foods fish are feeding on to tempt them. Specific windows in time become important and matching the fly to hatch and the phase of the hatch can be vital.

I’m honoured to judge this curious but important competition, which is a real test of angling maturity, knowledge, skill and dedication to catch fish the hardest way. For myself and John, we are judging a peer group. It only remains for me to congratulate everyone on the list and wish everyone an exciting new year- I look forward to seeing what is conjured up in 2020. ”

On a personal note, I’m hugely grateful to all who took part whether they won a prize or not. It’s always bitterly tough to judge and as much delight as I have announcing the winner and runner up, it’s always tough to tell someone who caught a spectacular fish “sorry, you didn’t come first.”

I’d also like to express my personal thanks to Matt Hayes, John Bailey and all media sources who helped and supported us once again. The great frustration remains that getting other journalists and titles to take an interest (no names) is like getting blood out of a stone!

This year will be hard work once again, especially combining my mass of fun but badly paid activities with looking after my latest catch- 6 month old baby Julia Garnett! Indeed, it may be time to enlist some help here- and no bad thing, because what strikes me most about the past few years is how many talented, passionate anglers we have- and the so many of them are still in their 20s, 30s and 40s can’t be bad either. Fly fishing clearly doesn’t have to be an old man’s sport any more than it has to be game fish only!

Anyhow, watch this space for more news. You can view all of the top competition entries for the last few years and find out more, see www.flyforcoarse.com

Meanwhile, our “Flyfishing for Coarse Fish” Facebook group is the place to be for news, updates and all things Fly For Coarse- do join us!